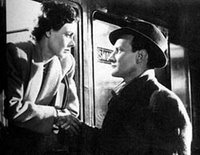 Brief Encounter (1945).
It seems appropriate for Valentine's Day to mention a great film, Brief Encounter, which was based on a short play by one of my favorite writers, Noel Coward, and is often considered one of the great British movies.

This film of thwarted love has it all: beautifully staged scenes by David Lean; wonderful performances by Celia Johnson and Trevor Howard; and a compelling honesty in its writing and approach. (Let's try to forget the attempt to rewrite it with a different ending, Falling in Love, starring Robert DeNiro and Meryl Streep [1984]. A huge disappointment.)