Diamond Dagger recipient Robert Barnard turns 70 on November 23rd. Maggie Topkis at Felony & Mayhem Press has recently reissued his Out of the Blackout, and his latest novel from Scribner is Dying Flames.

I was reading something in the blogosphere that mentioned fan mail to authors, and it reminded me of the first time I sent a fan letter to a writer.

The recipient was George C. Chesbro, and the book was Shadow of a Broken Man (1977), in which he introduced Robert "Mongo" Frederickson, dwarf, former circus performer, genius criminologist, and PI. I was a teenager at the time, gobbling up Christie, Queen, Stout, and numerous other mystery authors, and I greatly enjoyed Mongo's considerable talents and his touching relationship with his brother. In those pre-email days, I sent off a letter in care of the publisher stating how much I liked the book and that I tended to forget that Mongo was a dwarf because of his many skills. How startled I was to receive a postcard from Chesbro, telling me "Alas, like the rest of us, Mongo has to manage with what he has" and a little about the next book in the series (City of Whispering Stone). Touched that Chesbro had taken the time to respond, I kept the postcard for years.

We tend to forget the impact that books can have beyond their entertainment value. I think of the fan who told Anne Perry that her novels helped her through ovarian cancer. I think of a woman who was choosing books on tape in the library for a bedridden elderly person whose greatest pleasure was listening to mysteries. I think of the 10-year-old fan of Elizabeth Peters whose mother helped her to make a toolbelt so she could "play Amelia Peabody" in the backyard. I myself have received some kind emails about my own work, invariably prefaced by "I hope I'm not bothering you." I think of the entire community out there, readers and writers, in ongoing, dynamic, often silent dialogue with each other, many outside the world of the Internet, and am staggered.
Posted by Elizabeth Foxwell at 12:25 AM No comments: 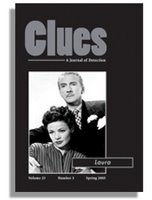 Vera Caspary, author of famed noir novel Laura and a talented screenwriter (A Letter to Three Wives, 1949), was born on November 13, 1899. She died in 1987. New paperback editions of Laura and her novel Bedelia are available from Feminist Press, and a play version of Laura is now running through November 18th at Chatauqua Playhouse in Carmichael, CA (near Sacramento).

According to A. B. Emrys (see her article "Laura, Vera, and Wilkie" in Clues: A Journal of Detection, spring 2005), Caspary was influenced by Wilkie Collins's The Woman in White and The Moonstone as she wrote first a screenplay treatment of Laura, then a full-fledged novel. Further information on Caspary may be found in her autobiography The Secrets of Grown-ups (McGraw-Hill, 1979).
Posted by Elizabeth Foxwell at 12:05 AM No comments:

Often dubbed "the mother of detective fiction," pioneering American mystery author Anna Katharine Green was born on November 11, 1846. She died in 1935 and is buried in Buffalo.

Her bestselling novel The Leavenworth Case (1878) has been taught in law schools to illustrate the deceptiveness of circumstantial evidence. I'm particularly fond of her books featuring intrepid spinster sleuth Amelia Butterworth (That Affair Next Door [1897], Lost Man's Lane [1898], and The Circular Study [1900]) and The Golden Slipper and Other Problems for Violet Strange (1915), in which Strange investigates cases in her New York social circle (I like the case where Strange appears at the crime scene in a ballgown--not exactly the wear we expect of a detective). Arthur Conan Doyle, Mary Roberts Rinehart, and Agatha Christie were all avid Green fans.

"I . . . realized that it would never do for me to lose my wits in the presence of a man who had none too many of his own."---Amelia Butterworth, That Affair Next Door

Posted by Elizabeth Foxwell at 12:00 AM No comments:

The fall 2006 issue of Clues: A Journal of Detection has been published, which is part 1 of a two-part issue on Victorian detective fiction. Articles focus on Mary Elizabeth Braddon, Wilkie Collins, Revelations of a Lady Detective (attributed to W.S. Hayward), Sherlock Holmes, Arthur Machen, Edgar Allan Poe, and "the detective fiction of female adolescent violence." The issue's table of contents and more information about the journal may be found here.
Posted by Elizabeth Foxwell at 9:30 PM 2 comments: