Distinguished mystery author-critic H. R. F. Keating—Detection Club member, Diamond Dagger recipient, Edgar nominee (for The Perfect Murder, 1965; Sherlock Holmes: The Man and His World, 1979; and Crime and Mystery: The 100 Best Books, 1987), and creator of the wise Inspector Ghote—turns 84 today.
Posted by Elizabeth Foxwell at 5:04 AM No comments:

Various videos from the guys behind Weird US (which began life as Weird NJ):

• The legend of the Jersey Devil
• Blairsden: a haunted mansion?
• The gates of hell
• Haunted Fort Mifflin, PA
• New Orleans cemeteries and voodoo
Posted by Elizabeth Foxwell at 5:04 AM No comments:

Lovecraftian bits in time for Halloween.

There is a fascinating account about the original manuscript of H. P. Lovecraft's "The Shadow Out of Time" (published in Astounding Stories in 1936, although Lovecraft was dissatisfied with the edited version, and reprinted in the Library of America volume edited by Peter Straub). Thought lost forever, it came to Brown University, which details its provenance here, including the part played by "an August Derleth." Also of interest: audio clips of Straub as part of the Lovecraft Reading series and Straub's editing of an issue of Conjunctions with sci fi, horror, and fantasy contributions. Further details on Brown's Lovecraft Collection can be found here.
Posted by Elizabeth Foxwell at 5:02 AM No comments:

Just in time for Halloween, the radio program With Good Reason tours spooky places in Virginia. (Also check out the Shenandoah Valley Paranormal Society and this account from the Arlington, VA, public library)
Posted by Elizabeth Foxwell at 5:05 AM No comments:

The University of Delaware exhibition "London Bound: American Writers in Britain, 1870–1916" includes M. P. Shiel (author of the Haycraft-Queen Cornerstone work Prince Zaleski, 1895, and friend of Arthur Machen); Baker Street Irregulars founder Christopher Morley; and Stephen Crane's "The Ghost," to which authors such as Henry James, H. Rider Haggard, and A. E. W. Mason (the latter the author of At the Villa Rose, 1910) contributed. The exhibition is on display until Dec. 17.
Posted by Elizabeth Foxwell at 5:02 AM No comments:

Tonight's Big Broadcast with WAMU's Ed Walker at 10 pm features Robert Young, Robert Mitchum, and Robert Ryan in "Crossfire," a 1948 episode of Suspense, in which a group of ex-soldiers is under investigation for murder (Young plays the investigator). The program can be heard here both live and after broadcast.
Posted by Elizabeth Foxwell at 5:01 AM No comments: 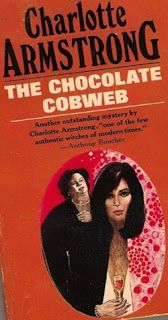 . . . [W]ho is to guarantee that evil itself wouldn't answer?
—Charlotte Armstrong,
The Chocolate Cobweb 53

Art student Amanda Garth is diverted when she learns that she may have been switched at birth with the son of noted artist Tobias Garrison. Via this episode, she wangles an introduction to Garrison and his immediate circle: his fluffy wife, Ione; his remote son, Thone; and his old actress friend, Fanny Austin. But all is not well. Was the death of Thone's mother, Belle, really an accident? Is the motherly Ione implicated in cold-blooded murder? And are dark events happening all over again?

Charlotte Armstrong Lewi (1905–69) received the Edgar for Best Novel for A Dram of Poison (1956), a favorite book of critic Anthony Boucher. Her novel The Unsuspected (1946) is on the Haycraft-Queen Cornerstone list of essential mystery works and was filmed with Claude Rains. Author Jan Burke, in a Clues column, fittingly dubbed Armstrong's work "suburban noir."
Posted by Elizabeth Foxwell at 5:05 AM 4 comments:

The Exile Bibliophile notes the establishment of a LibraryThing discussion group on bibliomysteries (that is, mysteries that involve books, manuscripts, libraries, and bookstores, among other book-related topics). Also note the bibliomystery collection at Simmons College, which has an extensive wishlist for donations. See also Mystery Readers Journal's 2005 issue on bibliomysteries. (Hat tip to PhiloBiblos)
Posted by Elizabeth Foxwell at 5:04 AM 2 comments:

The Top 50 Gambling Books of All Time (part 1 here and part 2 here) includes Ian Fleming's Casino Royale (1953) and Michael Connelly's Void Moon (1999).
Posted by Elizabeth Foxwell at 5:06 AM No comments:

I can only find one mystery-related item in the John Updike library that has just been cataloged by Harvard University, and that's the Updike-annotated copy of Robert Littell's Legends, in which a CIA agent-turned-private investigator struggles with past identities. But mystery readers may be interested in Updike's reflections on his "Bech Noir," in which writer Henry Bech murders his critics; this appears in Updike's collection Due Considerations (2007). "Bech Noir" was published in Updike's Bech at Bay (1998) and was reprinted in Best American Mystery Stories (ed. Ed McBain, 1999). A summary of "Bech Noir" may be found in this abstract of the New Yorker review.
Posted by Elizabeth Foxwell at 5:02 AM No comments:

BBC Radio 7 has been on a bender of late in featuring Russell Thorndike's swashbuckling vicar. This week it's The Last of Doctor Syn, read by Rufus Sewell. Go here for the schedule or to listen online.
Posted by Elizabeth Foxwell at 5:02 AM No comments:

Today in 1973, Arva "Marie" Johnson became the first African American woman to serve as a Capitol police officer.
Posted by Elizabeth Foxwell at 5:05 AM No comments:

The charming side of Edgar Allan Poe.

On the radio program With Good Reason, Jerome McGann of University of Virginia (Edgar Allan Poe's one-time alma mater) discusses the lighter side of Poe. Also on this program: Walt Whitman's experience in the Civil War.
Posted by Elizabeth Foxwell at 5:07 AM No comments:

The return of Allingham's More Work for the Undertaker (1948).

Felony & Mayhem Press continues its noble goal of reprinting the work of Margery Allingham (1904–66) in handsome, affordable paperback editions with More Work for the Undertaker (1948), in which Albert Campion seeks to determine who killed Ruth Palinode, part of a very odd family in west London that includes the brother-in-law of Campion compadre Lugg.

Although Christopher Fowler states in this September piece for the Independent that "many of Allingham's books appear to have vanished into [...a] pea-souper,"  it should be remembered that Allingham's The Tiger in the Smoke (1952) was selected by the Times of London as one of the Best 100 Mysteries of the twentieth century and is particularly admired by Ed Gorman. In addition, fellow Golden Age author L. A. G. Strong stated that Allingham's "One Morning They'll Hang Him" [Allingham Case-Book, 1969], "with a looser texture and a more leisurely pace than those of most American writers, achieves an enviable symmetry, and her red herring, the call at the chemist's shop, is slipped in with Chekhovian adroitness."

The Library of Congress has posted various presentations from the 2010 National Book Festival. These feature, among others:

Product of the day: "Got evidence?" mousepad.

The "got evidence?" mousepad, from the National Museum of Crime and Punishment.
Posted by Elizabeth Foxwell at 5:01 AM No comments:

H. G. Wells on US journalists.

Letters of Note features this cranky 1907 letter from H. G. Wells
after the publication of an interview. Plus ça change...?

The International Spy Museum's SpyCast recalls when the Canadian Embassy sheltered and aided six US diplomats in escaping from Iran during the hostage crisis (I well remember the photo after this episode of the Michigan billboard that faced the Canadian border. It featured the US and Canadian flags, and the message "Thank you, Canada.").
Posted by Elizabeth Foxwell at 5:06 AM No comments: 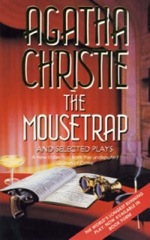 • Christie on "How to Write a Bestselling Novel" (1955)
• Various celebrations around the Christie play "The Mousetrap"
• An interview with Christie's second husband, archaeologist Sir Max Mallowan
• The place of Devon in Christie's work
Posted by Elizabeth Foxwell at 5:02 AM No comments:

As the sustainability of genre fiction is a topic of perpetual discussion, it seems there is nothing new under the sun. In April 1954, a spirited exchange in print occurred between John Wyndham Parkes Lucas Beynon Harris (aka John Wyndham, author of Day of the Triffids, 1951) and Morna Doris Brown (aka E. X. Ferrars [US] and Elizabeth Ferrars [UK], Detection Club member and a founder of the British Crime Writers Assn).

In "Roar of Rockets!" in the 2 Apr 1954 issue of John O'London's Weekly, Wyndham asserted that science fiction would replace mystery fiction.  Ferrars replied the following week in "No Danger to Detectives!".

Wyndham theorized that a shift in New York publishing to science fiction was because "there has been too much murder going on for too long." He stated, "The number of people who are bored with routine detective stories has been increasing.  . . . The present outbreak of rockets may be seen as the assault weapons softening up the detectives" (1–2). He dubbed some fictional detectives "long-toothed bores." However, he does not reserve his criticism to mysteries, addressing weaknesses in his own genre ("Wells's conceptions degenerated into a kind of super-gadgetry"). He also cited his choices for exemplary works (Vonnegut's Player Piano, Orwell's 1984, Lewis's cautionary It Can't Happen Here)—perhaps implying that mystery fiction could not propose their equals.

Ferrars, in her reply, pointed out that The Brothers Karamazov is a detective story and that both Shakespeare and Sophocles were concerned with murder. She also listed the strengths of the genre: "The detective story must deal with human emotions, with violence, fear, guilt, suspicion, courage, intelligence, and moral values . . . suspense must be created, curiosity stimulated” (2). Science fiction, she asserted, "cannot be redeemed by answering that fascinating question, whodunit? or give the reader the satisfaction of winning or losing in a game of wits with the writer."

Thankfully, Wyndham's prognostications have not come to pass. Indeed, it's hard to imagine one genre's fans doing a whole-scale jump to another, especially if they enjoy reading across genres.
Posted by Elizabeth Foxwell at 5:06 AM 5 comments: