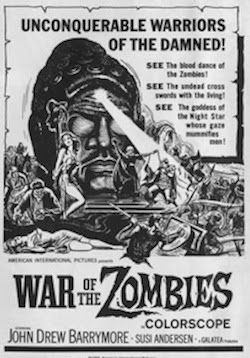 Many of you probably have been worrying about this, but William Baude of University of Chicago's law school finally has addressed the question of whether zombies have rights under the US Constitution. There's also Adam Chodorow's "Death and Taxes and Zombies," for those wondering if tax law applies to brain-eaters. (thanks, Law and Humanities blog)
Posted by Elizabeth Foxwell at 5:01 AM No comments: 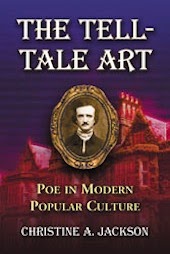 The latest recipient of the George N. Dove Award of the PCA's Detective/ Mystery Caucus is Christine Jackson (Nova Southeastern University, FL). The award is presented for contributions to the serious study of mystery and crime fiction. Jackson's publications include The Tell-Tale Art: Poe in Modern Popular Culture; she also has an article in the latest issue of Clues on Tana French.
Posted by Elizabeth Foxwell at 5:02 AM No comments:

Benjamin Welton pens an appreciation of Monsignor Ronald A. Knox (1888–1957), famed for his Detective Story Decalogue, his creation of sleuth Miles Bredon (I like his Footsteps at the Lock), and his launch of serious studies of Sherlock Holmes with this lecture. Welton calls Knox's Bredon works "charming, almost whimsical novels."
Posted by Elizabeth Foxwell at 5:06 AM No comments:

More from the Bridges family: In Trapped (directed by Soylent Green's Richard Fleischer), the Treasury enlists counterfeiter Lloyd Bridges in its efforts to smash a counterfeiting ring.

Some items re mystery film music, thanks to Scott Bettencourt at Film Score Monthly: • The new The Man in Half Moon Street showcases the compositions of Miklos Rozsa, providing music from this 1945 thriller as well as some of his work for The Strange Love of Martha Ivers (1946).

• A two-CD set has been released of Bruce Broughton's soundtrack for Young Sherlock Holmes (1985).

The return of J. B. Priestley's doctor-sleuth. 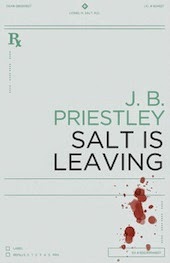 Valancourt Books follows up its reprinting of playwright-novelist-BBC broadcaster J. B. Priestley's Benighted with his sole novel featuring an amateur sleuth, Salt Is Leaving (1966). A retiring doctor suspects foul play when a patient who requires regular treatment suddenly goes incommunicado. (A review appears here from the Victoria [TX] Advocate.)
Posted by Elizabeth Foxwell at 5:02 AM No comments:

In Cottage to Let (dir. Anthony Asquith—son of the prime minister), a new bombsight proves irresistible to Nazis, the RAF, and Scotland Yard. The film features Alastair Sim, John Mills, and Michael Wilding and is adapted from a play by Geoffrey Kerr (father of actor-lawyer John Kerr, who is probably best known for his role in South Pacific). Also see Yvette Banek's earlier take on the film.

Harvard's Houghton Library blog features its copies of Harry Dickson—"le Sherlock Holmes Américain"—a pulp series penned by Belgian author Jean Ray (aka Raymundus Joannes de Kremer, John Flanders, and "the Belgian Poe") that had its beginnings in dime novels published from 1907 to 1911.
Posted by Elizabeth Foxwell at 5:05 AM No comments:

The return of Celia Fremlin.

Faber Finds has reissued a number of mysteries by Celia Fremlin (1914–2009), including her Edgar-winning The Hours before Dawn (dramatized on The Alfred Hitchcock Hour as "The Lonely Hours"). 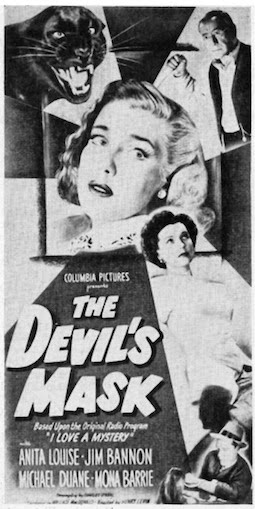 Based on Carleton E. Morse's radio series, I Love a Mystery follows the adventures of three insurance investigators. In the 1973 TV-movie version, mystery writer Melodie Johnson Howe appears as Charity, one of the daughters of star Ida Lupino. 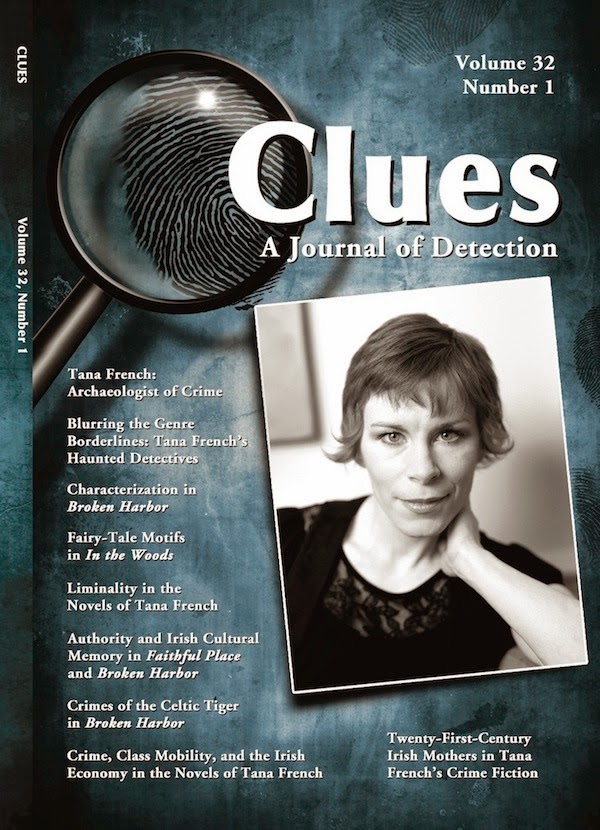 Clues 32.1 (2014) has been published, which is a theme issue on Tana French and Irish crime fiction. A summary of the contents appears below.To order, contact McFarland.

Blurring the Genre Borderlines: Tana French’s Haunted Detectives. JOHN TEEL (Marshall University). In each of her mysteries, Tana French presents a different detective-narrator, and all of them are “haunted” by traumatic events from their childhoods or teen years. Through this use of “haunting,” French blurs genre “borderlines” by mixing the elements of the police procedural with, essentially, an aura of the gothic.

Unhappily Ever After: Fairy-Tale Motifs in Tana French’s In the Woods. SARAH D. FOGLE (Embry-Riddle University). In her first novel, In the Woods, Tana French makes sustained use of various fairy-tale motifs and conventions to illuminate her characters and their relationships as the murder investigation unfolds.

Tana French: Archaeologist of Crime. RACHEL SCHAFFER. The parallels between archaeology and detection provide a framework for the way the protagonists in Tana French’s novels work. Both disciplines follow the same general stages of surveying the scene, excavating information, and analyzing and interpreting results to shed light on the effects of past events on the lives of contemporary people.

Liminality in the Novels of Tana French. MIMOSA SUMMERS STEPHENSON (University of Texas at Brownsville). In Tana French’s mysteries, the murder victims die at crucial turning points in their lives, and the detectives find themselves on the edge, neither in nor out, of the cases they investigate. The protagonists become involved personally and pass through liminal zones that leave them altered when the novels end.

Twenty-First-Century Irish Mothers in Tana French’s Crime Fiction. ROSEMARY ERICKSON JOHNSEN (Governors State University). Tana French’s three novels narrated by male detectives—In the Woods, Faithful Place, and Broken Harbour—reveal an intersection between crime fiction and the Irish literary tradition. Tropes of feminine imagery—particularly of the maternal—are implicated in the personal and professional failures of the narrators, and are part of French’s exploration of contemporary Ireland.

Murder in the Ghost Estate: Crimes of the Celtic Tiger in Tana French's Broken Harbor. SHIRLEY PETERSON (Daemen College). In Tana French’s fourth novel, Broken Harbor, the crimes of Celtic Tiger excess are interrogated in a deracinated ghost estate, where the desire for prosperity results in dire consequences for a young family, belying the notion that Ireland’s troubled past was well removed from its upwardly mobile present.

Authority and Irish Cultural Memory in Faithful Place and Broken Harbor. MAUREEN T. REDDY (Rhode Island College). French’s two most recent novels, Faithful Place and Broken Harbor, examine both the consequences of widespread loss of belief in any sort of authority in Ireland and some of the radical shifts in Irish cultural memory during the Celtic Tiger period and its aftermath.

"Built on Nothing but Bullshit and Good PR": Crime, Class Mobility, and the Irish Economy in the Novels of Tana French. MOIRA E. CASEY (Miami University of Ohio). Tana French’s novels demand serious literary attention for their social realist depiction of the cultural and economic impact of the Celtic Tiger economy and its recent crash. All four novels criticize Celtic Tiger culture, present the pre–Celtic Tiger past ambivalently, and represent the challenges of economic class mobility in contemporary Ireland.

The friendship of a notorious spy. 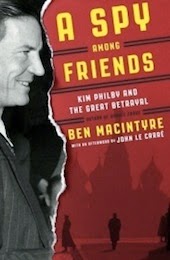 On the History Extra podcast Ben Macintyre (Agent Zigzag, Operation Mincemeat) talks about his upcoming book that delves into the friendship between the Cambridge Spy Ring's Kim Philby and MI-6 agent Nicholas Elliott. The book was inspired by a suggestion from John le Carre.
Posted by Elizabeth Foxwell at 5:04 AM 2 comments:

Celebrate today's birthday of Edgar Wallace (1875–1932, an important author in the development of the thriller) with Psycho-Circus, a film on the exploits of "a syndicate of evil" starring Christopher Lee, Leo Genn, and Klaus Kinski that is based on Wallace's The Three Just Men.

Posted by Elizabeth Foxwell at 5:00 AM No comments: