In The Case of the Curious Bride, Margaret Lindsay turns to lawyer Perry Mason (Warren William) after she has committed bigamy, and her first husband (Errol Flynn) ends up dead. The film, adapted from the novel by Erle Stanley Gardner, is directed by Michael Curtiz (spoiler alert for second clip).

Bruce Campbell, German studies program director and associate professor, at the College of William & Mary, follows up his fall 2016 lecture on the heavy historical legacies of German detective fiction with a September 15 appearance on the radio program With Good Reason.

In Criss Cross, Burt Lancaster becomes entangled with his ex-wife (Yvonne De Carlo), her gangster husband (Dan Duryea), and an armored car robbery. Other costars include Stephen McNally, Alan Napier, and Richard Long. The film is directed by Robert Siodmak (The Spiral Staircase).

Evan Hunter (aka Ed McBain) was the guest on Connecticut Voices in October 1994 to discuss his book There Was a Little Girl (featuring attorney Matthew Hope). He covers his background in art, the reaction to his novel The Blackboard Jungle and to the start of a new series with Hope, the beginning of the McBain pseudonym, the 87th Precinct novels, and the experience of working with Alfred Hitchcock on The Birds. "Paint the picture for the reader to see . . . with words," says Hunter.
Posted by Elizabeth Foxwell at 4:06 AM No comments: 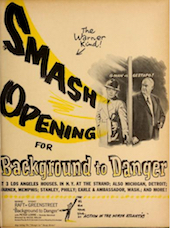 In Background to Danger, U.S. agent George Raft seeks to thwart a German plot that aims to mobilize Turkey against Russia during World War II. Costars include Brenda Marshall, Sydney Greenstreet, and Peter Lorre. Based on the novel by Eric Ambler, the film was directed by Raoul Walsh, with a screenplay by W. R. Burnett (Little Caesar, The Asphalt Jungle, etc.) and some screenwriting help by William Faulkner.

Flubs by Robinson and Bogart.

These clips from Warner Brothers blooper reels include appearances by Edward G. Robinson in Bullets or Ballots (1936, with Humphrey Bogart), by Bogart in Key Largo (1947), and by Cary Grant in Arsenic and Old Lace (1944).

Most accounts of the Aug 31 death of actor Richard Anderson at age 91 focused on his role as Oscar Goldman in The Six Million Dollar Man and The Bionic Woman, neglecting his numerous appearances on 1950s and 1960s TV. He was Lt. Steve Drumm in Perry Mason (1965-66), Richard Kimball's brother-in-law Leonard Taft in the last episode of The Fugitive (1967), and Fenton Hardy in The Hardy Boys: The Mystery of the Chinese Junk (1967). He also appeared in "The Purple Room," an October 1960 episode of Thriller dealing with a spooky house.

Alafair Burke on the legal system in fiction.

In Why Fiction? in the New England Law Review, Alafair Burke—a law professor at Hofstra University as well as fiction writer—explains why she writes about the law through fiction. As Burke notes:

(thanks to the Law & Humanities blog)
Posted by Elizabeth Foxwell at 4:08 AM No comments: