The Aug 2013 ABA Journal features the "25 Greatest Law Novels Ever." These include:

Some judges wrote essays on notable omissions such as Michelle Zierler on In Cold Blood by Truman Capote and Roz Myers on the Haycraft-Queen Cornerstone novel The Just and the Unjust by James Gould Cozzens. As an admirer of Cozzens's prose, I would not call his style "fusty," as Myers does. I'm also startled that not one Erle Stanley Gardner novel has been selected. (thanks to the Law and Humanities blog)
Posted by Elizabeth Foxwell at 6:10 AM 1 comment:


Posted by Elizabeth Foxwell at 5:02 AM No comments: 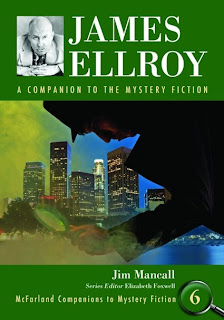 There is some preliminary information posted on James Ellroy: A Companion to the Mystery Fiction, written by Jim Mancall (Wheaton College, MA); it is volume 6 in the series I edit for McFarland. It most likely will be out in winter 2014, but can be preordered. The Midwest Book Review has called these companion books an "outstanding literary studies series."

Update. The Ellroy companion was published on January 2, 2014, and is now available for ordering. Writer-critic Dick Lochte calls it "a clear, comprehensive guide to the Demon Dog’s dark, complex literary world."
Posted by Elizabeth Foxwell at 5:03 AM No comments:

Watch a panel on international noir.

In The October Man, a chemist with a head injury from a bus accident is suspected of murder. Master spy novelist Eric Ambler wrote the screenplay and served as producer, and the film was directed by Roy Ward Baker (The Avengers, A Night to Remember, The Persuaders, The Saint).

The return of Michael Arlen.

Valancourt Books has reissued Michael Arlen's supernatural Hell! Said the Duchess: A Bedtime Story about a duchess suspected of killing several young men in London. It's the first time back in print since 1934. Arlen is best known for The Green Hat (1924) and for the creation of the Falcon, who was featured in films with George Sanders and his brother, Tom Conway, and a later TV series.
Posted by Elizabeth Foxwell at 5:02 AM No comments:

The ever-entertaining Green Bag journal offers a selection of Supreme Court Justice Learned Hand's greatest folk hits (liner notes here). It's probably just as well that he kept his day job.
Posted by Elizabeth Foxwell at 5:02 AM No comments:

In this November 1960 episode of Boris Karloff's Thriller TV series, someone bent on political assassination places a bomb in a woman's purse, but the police are hot on the trail. Featuring Robert Lansing, Elisha Cook Jr., and Mary Tyler Moore, it is adapted by author-screenwriter Philip MacDonald (The List of Adrian Messenger, etc.) from the novella "The Impulse" by John D. MacDonald (Cape Fear, etc.) that appeared in the June 1955 issue of Cosmopolitan.

Seldes on censorship of The Blackboard Jungle (1955).

In this October 3, 1955, episode from the radio program The Lively Arts, critic Gilbert Seldes speaks about the censorship of the film The Blackboard Jungle (adapted from the novel by Evan Hunter). It was withdrawn from the Venice Film Festival at the time, said to be due to pressure from Ambassador Clare Boothe Luce.
Posted by Elizabeth Foxwell at 5:02 AM No comments:

Born in Cheyenne, Wyoming, 84 years ago today, George Clayton Johnson has compiled some impressive credits (among them: author, Logan's Run; screenwriter for Honey West, Kung Fu, Mr. Novak, Ocean's Eleven, Route 66, Star Trek, and The Twilight Zone). He appears below in a Jan. 2013 talk at the Karl Hess Club in Los Angeles, discussing his career and stating, "I wanted to be Ray Bradbury."

In this April 1983 episode of Tales of the Unexpected, some shady booksellers attempt to extort a dead man's family—with unexpected results. Poirot's Hugh Fraser appears in this adaptation of James Gould Cozzens's "Foot in It" (Redbook Aug. 1935; repr. as "Clerical Error" in venues such as the June 1950 EQMM, Ellery Queen's The Literature of Crime, and Marcia Muller and Bill Pronzini's Chapter and Hearse). Cozzens (1903–78), author of the Haycraft-Queen Cornerstone novel The Just and the Unjust and the Pulitzer Prize winner Guard of Honor (admired by Raymond Chandler), was dubbed "the Garbo of U.S. letters" by Time magazine in 1957.

Rex Stout on the FBI and his career.

In the WNYC Radio archive is this 15-minute talk by Rex Stout (then-president of the Authors League of America, now known as the Authors Guild) from the Feb. 1966 program Books and Authors Luncheon. His remarks occurred a few months after the publication of his Nero Wolfe novel The Doorbell Rang that deals with the FBI and attracted quite a bit of attention because, says Stout, "I had the nerve to poke J. Edgar Hoover in the nose."

On his career, Stout says:


I realized that if I went on trying to make serious comments about human character and human problems, I would never turn out to be a Dostoevsky or a Balzac. So to hell with it, I quit. And I decided just to write stories and to try to make them as good stories as I could.

He also reports receiving a fan letter from Bertrand Russell and asserts that he is the only mystery author to have been translated into Ceylonese (the language of Ceylon, now known as Sri Lanka), besting Agatha Christie and Erle Stanley Gardner in this regard.

Scheduled for release today as part of the Hammer Chillers audio series is "The Devil in Darkness" by Christopher Fowler (author of the Bryant and Mays mysteries), in which a stuck elevator has sinister results.
Posted by Elizabeth Foxwell at 5:03 AM No comments:

Trent's Last Case on Why I Really Like This Bk.

The latest episode of Kate Macdonald's podcast Why I Really Like This Book is on E.C. Bentley's Trent's Last Case (1913), which Macdonald calls "a cracking good mystery." Macdonald is the author of the John Buchan companion in the series I edit for McFarland.
Posted by Elizabeth Foxwell at 5:02 AM No comments: