For those of us who may have missed the actual exhibit earlier in the year, there's now an interesting online retrospective of the multifaceted career of the late author, journalist, attorney, and ardent Red Sox fan George V. Higgins, most celebrated for The Friends of Eddie Coyle (1972; film 1973). It's available via the University of South Carolina Libraries, which now holds his papers.

"...people who are violent and unpredictable and who break codes and laws and all sorts of solemn promises, are more interesting than the people who behave themselves." -- George V. Higgins (1993)

Posted by Elizabeth Foxwell at 8:33 AM No comments:

I was delighted to discover, after only finding tattered used copies available, that the New York Review of Books Classics will reissue Rogue Male (1939) by Geoffrey Household on Nov 6. This classic work of suspense deals with a big-game hunter who tries to kill a dictator (read Hitler) and is in turn hunted.

Household, pseudonym of Edward West (1900-1988), was an intelligence officer during World War II. His other thrillers include Watcher in the Shadows (1960) and Dance of the Dwarfs (1968). He also wrote short stories and works for children.

Film versions of Rogue Male include Man Hunt (1941; dir. Fritz Lang) with Walter Pidgeon and Rogue Male (1976) with Peter O'Toole.
Posted by Elizabeth Foxwell at 9:26 AM No comments:

The Resurrection of Philip Bennion's Death.

Valancourt Books has announced its reprint of Richard Marsh's Philip Bennion's Death (1897), in which old Mr. Otway's friend is murdered, and Otway wonders if he committed the crime while sleepwalking.

Marsh (1857-1915) was the pseudonym for Richard Bernard Heldmann; his best-known work is probably The Beetle (1897). His grandson was the horror writer Robert Aickman. The summer 07 Clues features an article on Marsh's possibly autobiographical prison narrative "For Debt" (1902). Valancourt has also reprinted Marsh's The Joss: A Reversion (1901).

The Kansas City-based Valancourt is putting back into print hard-to-find Victorian, gothic, and other works, such as Bram Stoker's Lady Athlyne (1908), with new introductions by scholars and writers. H. Rider Haggard, Caroline Lamb, Sheridan Le Fanu, and Ann Radcliffe are just some of the authors represented.
Posted by Elizabeth Foxwell at 12:20 AM No comments:

Aviator and successful thoroughbred trainer Beryl Markham, author of West with the Night (1942), which deals with her pioneering 1936 solo flight from England to a crash landing in Nova Scotia, was born today in England in 1902. She died in 1986.

It has been disputed that Markham wrote the book (ex-husband Raoul Schumacher claimed authorship), but this question remains unresolved.

At least two characters on screen have been based on Markham: Felicity, played by Australian Suzanna Hamilton in Out of Africa (1985), and aviator Emma Fitzgerald, played by Susannah Harker, in Mystery!'s Heat of the Sun (1998).
Posted by Elizabeth Foxwell at 9:28 AM No comments:

Just in time for Halloween . . . read these tales of the haunting of Thurber House in Columbus, Ohio.

* reference to Thurber's "The Secret Life of Walter Mitty" (1941)
Posted by Elizabeth Foxwell at 12:14 AM No comments:

Happy birthday to the "Prince of Storytellers." 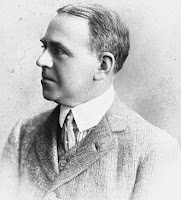 E. Phillips Oppenheim, often called the father of the thriller and "the Prince of Storytellers," was born today in 1866. He wrote 150 novels, starting off in 1887 with Expiation, and inspired fellow writer John Buchan. His immense success with works that combined espionage, romance, and mystery supported a luxurious lifestyle on the Riviera.

According to Michael Korda's Making the List, Oppenheim first hit the U.S. bestseller list in 1918 with The Pawns Count. His best known work is probably The Great Impersonation (1920), in which the reader is uncertain if the main character is a nasty enemy spy or a good guy until the end. His detective works include The Cinema Murder (1917); Nicholas Goade, Detective (1927); General Besserley's Puzzle Box (1935); Advice Limited, featuring sleuthing baroness Clara Linz (1935); and Curious Happenings to the Rooke Legatees (1937). I liked The Adventures of Joseph P. Cray (1925), in which the ex-YMCA volunteer Cray confronts and usually bests con artists and World War I profiteers. Oppenheim died in 1946.

The Great Impersonation was filmed in 1935 and 1942 and dramatized for radio in 1949. Go here to see a list of films of other Oppenheim works. Secrets and Sovereigns, a collection of Oppenheim's lively short stories, is available from Stark House Press.
Posted by Elizabeth Foxwell at 8:14 AM No comments:

The 39 Steps, the British stage production of the 1935 Alfred Hitchcock film and John Buchan's popular 1915 novel in which South African Richard Hannay finds himself embroiled in murder and espionage, is heading for the bright lights of Broadway. Four actors play nearly 140 roles. 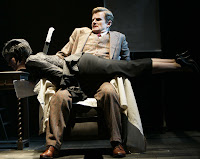 The 39 Steps will play at the American Airlines Theater via the Roundabout Theatre Company in New York. The run is scheduled from January 4 to March 23, 2008.

About the photo: A mysterious woman (Jennifer Ferrin) with an even more mysterious accent meets her end in the London flat of Richard Hannay (Charles Edwards), who's wrongly accused of killing her in the Huntington Theatre Company's pre-Broadway American premiere production of Alfred Hitchcock's "The 39 Steps." Photo: T. Charles Erickson

Posted by Elizabeth Foxwell at 8:02 AM No comments:

Reading about the Black Bird.

The ever-busy Richard Layman, a trustee for the Dashiell Hammett estate, advises of upcoming events in various cities that have adopted The Maltese Falcon as their NEA-sponsored "Big Read" project.

Montpelier, Vermont. Oct 21. The Big Read Kickoff. Don't miss the live dramatic readings and tapings for later television broadcast of The Maltese Falcon during the month of November.

You can find the entire schedule of nationwide Big Read events here.
Posted by Elizabeth Foxwell at 9:28 AM No comments:

Kathleen Winsor, author of Forever Amber (1944) and once married to musician Artie Shaw, was born today in 1919. She wrote six more novels after Amber and died in 2003.

Forever Amber, the story of a Restoration miss who sleeps her way to the top, was banned in Boston as obscene and is often credited with starting the subgenre of the "bodice-ripper." According to Library Journal, Forever Amber sold 100,000 copies after one week in the stores and eventually sold more than 2 million copies. Directed by Otto Preminger, the film appeared in 1947 and starred Linda Darnell and Cornel Wilde.
Posted by Elizabeth Foxwell at 10:00 PM No comments:

A word of praise today for author Ethel Lina White (1876-1944), most famous for The Wheel Spins (1936) and Some Must Watch (1933). These were both adapted for film: the former into Hitchcock's The Lady Vanishes (1938) with Michael Redgrave and Dame May Whitty, and the latter into Robert Siodmak's The Spiral Staircase (1945) with Dorothy McGuire, George Brent, and Ethel Barrymore. For the film, The Spiral Staircase's setting was changed to early-twentieth-century New England, but not one whit of its nail-biting plot about a serial killer stalking women is diminished. (Remakes appeared in 1961, 1975, and 2000).

The characters Charters and Caldicott, who debuted in The Lady Vanishes, also appear in Night Train to Munich (1940), Crooks Tour (1941), Millions Like Us (1943), and the TV series Charters & Caldicott (1985). Iris Carr in The Wheel Spins inspired K. K. Beck's smart flapper sleuth Iris Cooper (Death in a Deck Chair, Murder in a Mummy Case, Peril Under the Palms).

Sadly, with the exceptions of The Lady Vanishes, Some Must Watch, and While She Sleeps, the rest of White's suspense work is out of print. This includes Midnight House (aka Her Heart in Her Throat, 1942), filmed as The Unseen (1945) with Joel McCrea and Gail Russell and scripted by Raymond Chandler. Go here for a list of White's work.
Posted by Elizabeth Foxwell at 11:09 AM No comments: 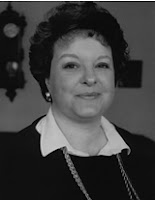 American-born mystery author Paula Gosling, who now resides in Britain, turns 68 today. She received a Gold Dagger from the British Crime Writers Association for Monkey Puzzle and the John Creasey Award for A Running Duck (filmed as Cobra, 1986, and Fair Game, 1995). Her books include the suspense work Tears of the Dragon, the Halloween mystery A Few Dying Words, The Dead of Winter, and The Body in Blackwater Bay.
Posted by Elizabeth Foxwell at 2:40 PM No comments: 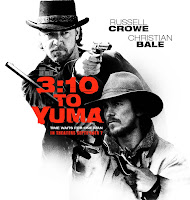 Elmore Leonard, whose many works include Mr. Majestyk, Maximum Bob, and Get Shorty, was born today in New Orleans in 1925. His latest novel is Up in Honey's Room.

It's often forgotten in the reviews of 3:10 to Yuma that the film (and its 1957 incarnation) are based on the 1953 Leonard short story "Three-Ten to Yuma." His sage "Ten Rules of Writing" will shortly be out in illustrated book form. (Rule 10: "Try to leave out the part that readers skip.")
Posted by Elizabeth Foxwell at 12:16 AM No comments:

Beyond the Body Farm.

Forensic anthropologist William M. Bass III has coauthored a new book with Jon Jefferson: Beyond the Body Farm, which tells some tales of Bass's long career in deciphering what dead bodies can reveal in the aid of law enforcement.

Go here to listen to a NPR story about the book, see video about the Tennessee facility the Body Farm that has provided hard data on the decomposition of corpses, and read an excerpt from Beyond the Body Farm.

Many moons ago, Bass was my professor for Introduction to Physical Anthropology. I found that I was more interested in cultures than the cranial capacity of Cro-Magnon man and thus no candidate for crime scene investigation. He often was called away to consult on various cases, including verifying that Lee Harvey Oswald was indeed who was buried in the grave of JFK's assassin.
Posted by Elizabeth Foxwell at 8:25 AM No comments:

Edward Stratemeyer, creator of the Stratemeyer Syndicate that gave us Tom Swift (who bears some similarity to aviation pioneer Glenn Curtiss), the Hardy Boys, the Bobbsey Twins, Nancy Drew, and many other books with adventurous young people, was born today in 1862. A list of some of the syndicate pseudonyms follows at the bottom of this post.*

Stratemeyer began his career at the dime novel publisher Street & Smith as a writer and editor, creating the popular "Rover Boys" series in 1899. He began the syndicate in 1905, figuring out that "house names" plus armies of ghostwriters could spell profit. Peak periods for the syndicate were between 1912 and 1917 and 1922 and 1927, when it was producing approximately 50 series. Stratemeyer died in 1930, and the syndicate was taken over by his daughters, Harriet Adams and Edna Squier, and in time by Adams alone. Gradually, only the Hardy Boys and Nancy Drew remained and were sold to Simon & Schuster after Adams's death in 1982. The syndicate records are now found in the New York Public Library.

Before the day is done: Author Jack Finney, best known for two works—The Body Snatchers (1955) and Time and Again (1970)—was born today in 1911. He died in 1995. The film Somewhere in Time (based on the novel Bid Time Return by Richard Matheson, who makes a cameo appearance in the film) pays homage to Finney when aspiring time traveler Christopher Reeve goes to consult "Professor Finney" about his plans.

The fourth and latest film adaptation of Body Snatchers, The Invasion, came and went fairly quickly, and I suspect for many, Kevin McCarthy (from the 1956 film version) will always be their man. The engaging Time and Again, featuring a government experiment in time travel set in Gilded Age New York, has seldom been out of print; at one time, it was rumored that Robert Redford was interested in a film version. "You write a book," Finney was quoted in Entertainment Weekly in 1995 about Time and Again, "and you don't expect it to hang around."
Posted by Elizabeth Foxwell at 10:30 PM No comments: