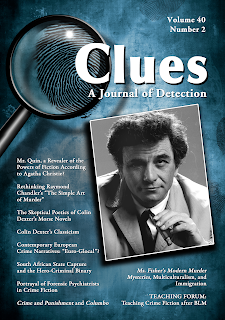 Clues 40.2 (2022) has been published, featuring its first Teaching Forum—this one on teaching crime fiction after Black Lives Matter, engaging with issues such as race, gender, and class. As usual, we are delighted to have contributors from around the world. See below for abstracts. Contact McFarland for subscriptions or a print copy of the journal. I'll update this post once the ebook versions are available.

This review article revisits Raymond Chandler’s essay “The Simple Art of Murder” and examines its ongoing relevance for crime fiction studies. It asks to what extent does Chandler’s iconic essay help us to understand and explain the crime genre, both historically and today.

Deon Meyer’s The Last Hunt can be categorized as African noir in its themes of political disillusionment, corruption, and crimes of the state against its citizens, shedding light on contemporary African-European relations. The article examines the novel’s intersections of time, space, national, and transnational with criminal and detective characters, and the blurriness of the hero-criminal binary.

The article makes a case for the emergence of a particularly European brand of crime fiction, film, and television series that fosters a closer European union.

“Mystery” Beyond Reason:
Mr. Quin, a Revealer of the Powers of Fiction According to Agatha Christie?
MARC VERVEL (Université de Paris, France)

The short story collection The Mysterious Mr. Quin has a special place in Agatha Christie’s work. In these stories where rational investigation opens up to the supernatural, Christie theorizes what is at stake in the desire to read and proposes an expanded conception of the detective story.

This article argues that Detective Chief Inspector Morse is a different figure in Colin Dexter’s novels than the popular television series. The author locates Dexter’s novels in British postwar crime fiction, with attention to representations of the social reality of Oxford and gender issues, and reads The Wench Is Dead to argue Morse’s hermeneutic approach to investigation reveals an ironic skepticism about truth.

Colin Dexter’s Inspector Morse books, unlike any other detective novels, are saturated with references to Greek and Latin language and literature. This article explores the significance of Classics and classical scholarship in Dexter’s world and argues that the novels present a consistent (and consistently troubling) view of education and culture.

The period drama Ms. Fisher’s Modern Murder Mysteries, set during the period of the White Australia policy, frequently addresses Australia’s relationship with immigration and immigrant communities. This article analyzes the series’ interaction with contemporary discourses about multiculturalism, immigration, and the role of British culture in Australia.

Crime and Punishment and Columbo:
The Inverted Mystery, the Everyman, and Investigation by Rhetoric of Inquiry
CHRISTYNE BERZSENYI (Penn State University, Wilkes-Barre)

In their hit television series Columbo, Richard Levinson and William Link pay homage to Dostoevsky’s Crime and Punishment, showing the commission of the crime first and revealing the villains’ motivations and cover-ups. The brilliant St. Petersburg Magistrate Porfiry Petrovitch and LAPD’s Lieutenant Columbo present their personae with excessive displays of friendliness, self-deprecation, rhetorical questioning, and the false exit.

The Novel and Not the Police / THEODORE MARTIN (University of California, Irvine)

The author describes his attempt to design and teach a crime fiction class relevant to our era of racial criminalization and mass incarceration. The resulting class sought to de-center the detective novel and de-emphasize genre coverage, and instead invited students to explore the more varied ways that novels have responded to American ideologies of crime and criminal justice.

The essay examines how a pedagogic practice centered around reading Munshi Premchand’s “Sadgati” (Deliverance, 1931) in terms of crime and justice rather than as a sentimentalized narrative of a poor man’s suffering can draw attention to its limits in adequately exploring issues related to caste.

This essay discusses teaching novels by Raymond Chandler and Walter Mosley as a strategy for helping students connect American racial politics from the 1940s and 1990s with their contemporary world and the Black Lives Matter movement.

In the wake of public demands for justice and calls for institutional reforms, studying Edgar Allan Poe’s fictional detective, C. Auguste Dupin, can provide a corrective model to the cold confines of academic inquiry that tends to treat life like an academic affair.

Somebody That I Used to Know: Reading Gendered Silences in the Sherlock Holmes Canon
TOM UE (Dalhousie University, Canada)

This article attends to the silenced women in some of Arthur Conan Doyle’s Sherlock Holmes stories and recommends ways that students might be encouraged to think about them and respond to them ethically and imaginatively.

The author explores how intersectionality, race, and feminism can be taught through using traditional and contemporary crime fiction in the diverse undergraduate classroom. Examining the relationship between privilege and crime portrayed in the crime genre, the author seeks to nurture an inclusive teaching and learning space where crime fiction can illuminate contemporary cultural debates.

An introduction to comics studies class evolved into a platform for identifying genre conventions in urban crime superhero fiction in the context of both the pandemic and social anxieties relating to the BLM movement. The author examines how the initial crime fiction emphasis on Batman grew into a dialogic reflection concerning BLM and other crime-adjacent social topics in the initial months of the coronavirus global pandemic.