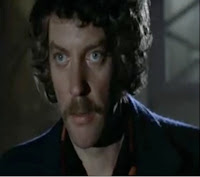 Following the New York Review of Books Classics reprint of Geoffrey Household's Rogue Male is a collection of Daphne du Maurier's short stories, Don't Look Now. It includes the really creepy title story, "The Blue Lenses" (which was just broadcast on BBC Radio 7 and can still be heard here), and "The Birds" (filmed by Hitchcock with a screenplay by Evan Hunter).

About the photo: Donald Sutherland in Don't Look Now (dir. Nicolas Roeg, 1973)
Posted by Elizabeth Foxwell at 5:05 AM 2 comments:

More on Raffles, the Amateur Cracksman.

Over on the Guardian Books blog, Stuart Evers examines the morals of E. W. Hornung's A. J. Raffles—cricket player, man about town, and gentleman thief—and credits Hornung—Conan Doyle's brother-in-law—with considerable foresight. He writes, "Hornung, I believe, saw a new kind of crime story on the horizon: those of the hardboiled pulp novelists, and of the more psychologically acute writers such as Patricia Highsmith."

Evers points out that Atlantic Books has republished Raffles as part of its Classic Crime series (along with Sapper's Bulldog Drummond and Charles Dickens's Bleak House). Jim French Productions has been doing audio productions of Raffles for quite some time.
Posted by Elizabeth Foxwell at 5:04 AM No comments:

Some highlights from Bloomsbury's April 23rd literature auction:
Sadly, the copies of Leslie Charteris's The Saint vs. Scotland Yard and The Saint and Mr. Teal that I mentioned in this post went unsold (as did copies of Chandler's Farewell My Lovely and The Long Goodbye).
Posted by Elizabeth Foxwell at 5:03 AM No comments:

This week on BBC Radio 7: Alexander McCall Smith's No. 1 Ladies Detective Agency and Ellis Peters's Brother Cadfael in Monk's Hood (sadly, not with Derek Jacobi but with Philip Madoc and Michael Hordern). Go here for the schedule or to listen.
Posted by Elizabeth Foxwell at 5:03 AM No comments:

The first female detective in literature?

In today's Washington Post, Dennis Drabelle quotes from John Sutherland's Curiosities of Literature, stating that "the first female detective in literature was probably Amelia Butterworth, who made her debut in Anna Katharine Green's That Affair Next Door (1897)."

The assertion is inaccurate. Mrs. G. in The Female Detective (1864) by Andrew J. Forrester Jr. is commonly identified as the first female detective in fiction. Also predating Butterworth are Mrs. Paschal in the anonymous The Experiences of a Lady Detective (1864, following Forrester by six months; attrib. to William Stephens Hayward, but there is controversy about this attribution), Catherine Louisa Pirkis's Loveday Brooke (1893, stories collected in The Experiences of Loveday Brooke, Lady Detective), and Emma Van Deventer's Madeline Payne (Madeline Payne, Detective's Daughter, 1884; and Moina, 1891). One could also argue that Wilkie Collins's Marian Halcombe acts as a detective in The Woman in White (1860), as well as Mary Elizabeth Braddon's Eleanor Vane in Eleanor's Victory (1863).

Over on the Princeton University Press blog, Peter Leeson, author of The Invisible Hook: The Hidden Economics about Pirates, addresses some of our most cherished myths about those that plundered the high seas in past centuries, such as hapless captives walking the plank.

About the image: Avast! The good people at Price, Stern & Sloan offer Pirate Mad Libs.
Posted by Elizabeth Foxwell at 5:05 AM No comments:

The Smithsonian's National Museum of National History has posted "The Secret in the Cellar," a Webcomic that follows the clues provided by a recently unearthed, centuries-old skeleton.

About the image: Ana the intern from "The Secret in the Cellar, " Smithsonian Institution.
Posted by Elizabeth Foxwell at 5:07 AM No comments:

Alice in Wonderland and Linda Fairstein.

The New York Public Library blogs about rare editions of Lewis Carroll's Alice in Wonderland, which form a key component of Linda Fairstein's Lethal Legacy.
Posted by Elizabeth Foxwell at 5:04 AM No comments:

The University of Chicago Press blogs about its three new reprints of novels by Richard Stark (aka the late Donald Westlake)—The Mourner, The Score, and The Jugger, all with forewords by John Banville (aka Benjamin Black) —although I was startled to read in the press release that "Richard Stark is available for interviews." Via The Twilight Zone, perhaps?
Posted by Elizabeth Foxwell at 5:04 AM No comments:

This week on BBC Radio 7: The late John Mortimer reads from his memoir Where There's a Will, along with episodes of Rumpole of the Bailey with Maurice Denham; Daphne du Maurier's "The Blue Lenses" and The House on the Strand; and assorted Agatha Christie tales. Go here for the schedule or to listen.
Posted by Elizabeth Foxwell at 5:06 AM No comments: 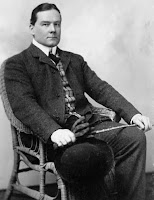 Davis birthdays today: Pulp writer (with touches of screwball comedy) Norbert Davis was born today in Illinois in 1909. Swashbuckling war correspondent, playwright, and writer Richard Harding Davis was born in Philadelphia in 1864. The son of novelist Rebecca Harding Davis, Davis covered the Spanish American War in Cuba (where he became a friend of Theodore Roosevelt and helped to create the Rough Rider legend in the press), the Boer War, and World War I (during the latter he was captured by the Germans and accused of spying). He produced some 40 books before passing away in 1916.

Posted by Elizabeth Foxwell at 5:10 AM No comments:

Featured in this week's SpyCast from the International Spy Museum is Rear Admiral Donald Mac Showers, who served as a codebreaker in the US Navy during World War II. He discusses how codebreaking helped defeat the Japanese at Midway and played a significant role in locating for US forces Admiral Isorku Yamamoto, who planned the attack on Pearl Harbor.
Posted by Elizabeth Foxwell at 5:08 AM No comments:

For those who like to see a different bestseller list, here is one for Valancourt Books to date for 2009:

3. The Veiled Picture; or the Mysteries of Gorgono by Ann Radcliffe (orig. publ. 1802)

Clues issue on the girl sleuth.

Clues 27.1 has been published, the first issue in a larger format and with a redesigned cover. It also is a theme issue on the girl sleuth (Nancy Drew, Veronica Mars, et al.), guest edited by Leona W. Fisher (Georgetown University). See below for a table of contents; go here for the abstracts; here for print and online subscription information.

“Use Your Head, Judy Girl”: Relationships, Writing, and an Ethic of Care in the Judy Bolton Mysteries - Mary Jeanette Moran

The Legacy of George and Bess: Sidekicks as Normalizing Agents for the Girl Sleuth
- Julie D. O’Reilly

“You Get Tough. You Get Even”: Rape, Anger, Cynicism, and the Vigilante Girl Detective in Veronica Mars - Alaine Martaus

Mary Hadley and Sarah D. Fogle, eds. Minette Walters and the Meaning of Justice: Essays on the Crime Novels - Martyn Colebrook
Posted by Elizabeth Foxwell at 5:07 AM 2 comments:

Recent releases from Crippen and Landru.

Virginia-based small press Crippen & Landru is always uncovering gems from writers known in other fields who "moonlighted" in mystery (such as Western icon Max Brand). Its latest release, A Little Intelligence, collects mystery short stories by two science fiction authors, Robert Silverberg and Randall Garrett, who teamed up to write under the name Robert Randall.

Another recent release is The Minerva Club, the Department of Patterns, and Others by Victor Canning, in which the club, intriguingly, is made up of criminals involved in various, usually illegal, capers.
Posted by Elizabeth Foxwell at 5:06 AM 1 comment:

Some early female detectives are featured this week on BBC Radio 7: American author Anna Katharine Green's socialite Violet Strange in "The Golden Slipper" (1915) and British writer Catherine Louisa Pirkis's Loveday Brooke in "The Redhill Sisterhood" (1893). Go here for the schedule or to listen.

About the photo: Anna Katharine Green, taken bet. 1870 and 1890. Library of Congress, Prints and Photographs Division.
Posted by Elizabeth Foxwell at 5:06 AM No comments:

The Washington Post gets into the Marshmallow Peeps diorama act with this display of 40 finalists, including new takes on M.C. Escher, Edward Hopper, John Steinbeck, The Day the Earth Stood Still, The Twilight Zone, and the game Clue.

Mary Peeppins?
Posted by Elizabeth Foxwell at 5:04 AM No comments:

Copyediting at newspapers—or the lack thereof.

My former journalism professor Carl Sessions Stepp discusses the impact of the lack of copyeditors at newspapers in the April/May 2009 issue of the American Journalism Review.

And speaking of the need for copyeditors: Look here (under "Take 2") at a headline that could have badly used a copyeditor.
Posted by Elizabeth Foxwell at 5:06 AM No comments:

Just in time for Easter, you can now view and vote for your favorite Chicago-themed Peeps diorama at the University of Chicago magazine Web site. I think I would have to go with no. 9, "Eliot Nest and the UnPeepables," Katie Hrinya's re-creation of the climatic train station scene from The Untouchables.
Posted by Elizabeth Foxwell at 5:08 AM No comments:


After PhiloBiblos reported the theft of Pack, one of the ducklings that compose the Boston Public Garden statue commemorating Robert McCloskey's beloved Make Way for Ducklings (1941), Pack was found in Beacon Hill, four blocks from his bronze family.

Obviously, fowl play was involved...
Posted by Elizabeth Foxwell at 5:07 AM No comments:

007 beats The Saint at auction.

There's not much mystery related to report from Bloomsbury's April 2nd bibliophile auction. The Leslie Charteris books featuring Simon Templar, aka The Saint—Trust the Saint, Saint Overboard, and The Saint on the Spanish Main—went unsold. There were a few Ian Fleming titles that did respectably: A first edition of From Russia, with Love, £320 (approximately $470); a first edition of Goldfinger, £300 (approximately $440); copies of Octopussy and The Living Daylights, signed (respectively) by Maud Adams and Maryam D'Abo (who appeared in the respective films), £280 (approximately $411).

Perhaps the copies of The Saint vs. Scotland Yard and The Saint and Mr. Teal, which will be offered for sale on April 23rd, will do better. They are each estimated at a minimum of £200.
Posted by Elizabeth Foxwell at 5:02 AM 2 comments:

Katherine Neville, best known as author of the multifaceted thriller The Eight (1989), was born today in St. Louis in 1945. The Fire, her follow up to The Eight, was published in 2008. Other works include A Calculated Risk (1992) and The Magic Circle (1998).
Posted by Elizabeth Foxwell at 5:07 AM No comments:

Jeff Prucher, of the Hugo-winning Brave New Words: The Oxford Dictionary of Science Fiction, provides on the Oxford University Press blog "Nine Words You Might Think Came from Science but Which Are Really from Science Fiction." I love the fact that Dave Gerrold (of Star Trek's "The Trouble with Tribbles") first linked the word virus with nasty computer programs in 1972.
Posted by Elizabeth Foxwell at 5:07 AM No comments:

Overlook Press, which has reprinted Charles Portis's True Grit with an afterword by novelist Donna Tartt, reports that the Coen brothers are planning to remake this classic western (Adam Sandler had better not be cast as the legendary lawman. Is Sam Elliott available?).

True Grit is an entry on the Telegraph's list of "100 Books Every Child Should Read."
Posted by Elizabeth Foxwell at 5:03 AM No comments:

For April Fool's Day, the Oxford DNB talks about historical hoaxes such as Piltdown Man and Princess Caraboo, while the Museum of Hoaxes lists the Top 100 April Fool's Day Hoaxes of All Time (see also the museum's Famous Hoaxes throughout History).
Posted by Elizabeth Foxwell at 5:04 AM No comments: