An Edwardian retired couple (James Mason, Barbara Mullen) move into their new residence, only to find that it is haunted and has a strange effect on the wife's companion (Margaret Lockwood). The film is based on the short story of the same name by Osbert Sitwell.

A new take on "The Musgrave Ritual."

The Law & Humanities blog highlights Ross E. Davies's map in The Green Bag that accompanies "The Musgrave Ritual" (1893), which attempts to identify when and where Holmes told Watson about the case and provides the historical backdrop to the ritual.
Posted by Elizabeth Foxwell at 4:07 AM No comments:

The mysteries of Isaac Asimov. 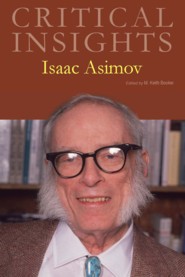 My essay "'I Write Christie': The Mysteries of Isaac Asimov" has been published in Salem Press's Critical Insights: Isaac Asimov edited by M. Keith Booker (U-Arkansas). It assesses Asimov's mystery fiction, as there is little critical work on this area of Asimov's oeuvre (aside from his science fiction mysteries with detective Elijah Baley and robot R. Daneel Olivaw). The essay looks at Asimov's vastly underrated debut mystery novel, The Death Dealers (aka A Whiff of Death, rooted in his graduate school experiences at Columbia); Murder at the ABA (with a protagonist based on sci-fi author Harlan Ellison); Black Widowers mystery short stories (with characters modeled on other sci-fi writers); Union Club short stories (with an Asimov alter ego); the Baley-Daneel series; children's mysteries; and assorted other stories. Asimov was a Golden Age mystery fan, and his puzzle mysteries reflect this tradition.

Check out the table of contents.
Posted by Elizabeth Foxwell at 4:02 AM 2 comments:

Opening in April at the Rosenbach Museum and Library in Philadelphia will be the exhibition "Clever Criminals and Daring Detectives" that will take a historical look at criminals and detectives in fiction. Materials on display will include the original manuscript of Arthur Conan Doyle's "The Adventure of the Empty House" and reflections on mystery collecting of Ellery Queen.
Posted by Elizabeth Foxwell at 4:08 AM No comments:

The Law & Humanities blog calls attention to this podcast on 1970s female TV detectives from Advanced TV Herstory. The episode covers the Nancy Drew TV series with Pamela Sue Martin, Mrs. Columbo with Kate Mulgrew, and Charlie's Angels.
Posted by Elizabeth Foxwell at 4:03 AM No comments:

In The Phantom Light, the murder of a lighthouse keeper is complicated by the appearance of a mysterious light and a band of wreckers. Starring Gordon Harker (great-uncle of actress Susannah Harker) and Ian Hunter, the film is directed by Michael Powell (before he and Emeric Pressburger formed the Archers), from a play cowritten by Australian-born Evadne Price (who wrote Not So Quiet... Stepdaughters of War under the pseudonym Helen Zenna Smith). Mystery author Joseph Jefferson Farjeon (aka Anthony Swift) provided some dialogue.

The banning of Conan Doyle and Hammett.

The Department of Special Collections of the Kenneth Spencer Research Library at the University of Kansas has posted online the catalog (with images) of its 1955 exhibition on banned books, which received ALA's Letter Library Award in 1956.

The exhibition includes, under Russia, works by Arthur Conan Doyle, "because they dealt with occultism and spiritualism."

The U.S. section reveals that Dashiell Hammett's The Maltese Falcon (1930) was removed from State Department libraries abroad in June 1953—part of efforts to drop or destroy works characterized by the department as written by communists. (In 1951, Hammett went to prison in Kentucky for contempt of court; he had refused to reveal the names of those who posted bail for four communists.) The NEA Big Read Web page on The Maltese Falcon states that Sen. Joseph McCarthy (R–WI) was responsible for this move, but Hammett's books were restored by a fan: President Dwight D. Eisenhower.

Another interesting entry: a biography of Lawrence of Arabia by Richard Aldington, suppressed by friends of T. E. Lawrence because Aldington made controversial assertions such that Lawrence was untruthful about his experiences and did not acknowledge help of literary figures on The Seven Pillars of Wisdom. However, the book was published in French in 1954 and English in 1955, and critics have since questioned its level of objectivity.
Posted by Elizabeth Foxwell at 4:07 AM No comments: