DC-area resident James Grady, probably best known for his thriller Six Days of the Condor that was adapted into the 1975 film Three Days of the Condor starring Robert Redford, turns 58 today. His latest novel is Mad Dogs, which will be out in paperback in June, and he has a story in the anthology DC Noir.

If you ever get the chance, read the Washington Post interview with Grady by Sarah Booth Conroy from September 14, 1984. I kept it for years because it was so inspirational about writing.
Posted by Elizabeth Foxwell at 7:40 AM No comments:

Golden Age icon Dame Edith Ngaio Marsh, the pride of New Zealand and the creator of well-born inspector, later superintendent, Roderick Alleyn, was born today in 1895 (although some sources list her birthdate as 1899) and died in 1982. Some of her many novels include Death in a White Tie, Clutch of Constables, and Tied Up in Tinsel.

I'm rather partial to Artists in Crime, because of the debut of that marvelous character, painter and later Alleyn love interest Agatha Troy.
Posted by Elizabeth Foxwell at 7:53 AM No comments: 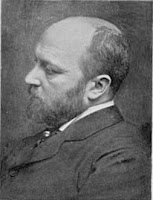 In mysterydom, he is probably best known for the creepy The Turn of the Screw (1898), adapted into the film The Innocents starring Deborah Kerr and featuring a screenplay by Truman Capote and John Mortimer, and also adapted as a Benjamin Britten opera. The debate continues today as to whether the ghosts in the story are a figment of the governess's imagination or whether they really exist. Another James ghost story is The Sense of the Past (published posthumously, 1917), the basis of Berkeley Square, which starred Leslie Howard.
Posted by Elizabeth Foxwell at 12:35 PM No comments:

Labels: henry james, the turn of the screw 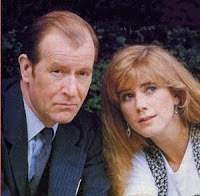 Crippen and Landru has published a collection of Cody's short stories, Lucky Dip and Other Stories. She earned a Silver Dagger for Bucket Nut (1992) and the John Creasey Award for Dupe (1980).

Posted by Elizabeth Foxwell at 8:40 AM 2 comments:

Sgt. Joe Friday, also the creator of Emergency! and Adam-12, would have turned 87 today. In Webb's honor, today's "It's a Mystery" featured a radio production of Dragnet, two Dragnet parodies, and Webb's rendition of "Try a Little Tenderness." To listen to Bob Hope and Webb's 1953 parody of Dragnet, go here.
Posted by Elizabeth Foxwell at 2:20 PM 1 comment:

Publishing phenomenon Edgar Wallace, who did much to foster the popularity of the thriller, was born today in 1875. He died in 1932, when he had gone to Hollywood for the filming of King Kong (on which he has a writing credit).

Some of his better known works include The Four Just Men (1906; made into a 1959 TV series with Jack Hawkins and Richard Conte, about an international cadre of vigilantes), The Ringer (a highly popular play starring Gerald du Maurier, also known as The Gaunt Stranger), The Crimson Circle (1922), and The Mind of Mr. J. G. Reeder (1925). Wallace was famous for his staggering output (he could finish a novel in one weekend, but sometimes character and plot details would alter from the early part of the book to the end) and equally impressive sales figures. One of his secretaries was the future mystery writer Nigel Morland.

On the April 9th broadcast of "It's a Mystery," I plan to air "Criminal at Large," an episode of the Molle Mystery Theater, based on Wallace's The Case of the Frightened Lady that features a strangler. For more on Wallace, read his People: A Short Autobiography (1926), or Margaret Lane's Edgar Wallace: The Biography of a Phenomenon (1939; Lane was once married to Bryan Edgar Wallace, the author's son).
Posted by Elizabeth Foxwell at 10:15 AM No comments: