A man witnesses a murder and goes on the run, pursued by his wife (Ann Sheridan), the police (Robert Keith), the media (Dennis O'Keefe), and the murderer. The film is based on the short story "Man on the Run" (1948) by Sylvia Tate. One of the screenwriters is Alan Campbell, husband of Dorothy Parker; the other is Norman Foster, who also directed the film.

In Murder with Pictures, newspaper photographer Lew Ayres looks into the murder of a lawyer and encounters complications when he falls for the suspected perpetrator (Gail Patrick). The film is based on the book of the same name (1935) by MWA Grand Master George Harmon Coxe.

In praise of Oppenheim.

Melody of the Redeeming Qualities blog pens an appreciation of the E. Phillips Oppenheim works The Long Arm of Mannister (1909; "he likes to take his victims to dinner and toy with them") as well as Mr. Billingham, the Marquis and Madelon (1927; "[e]veryone drinks lots of champagne cocktails"). She especially likes private inquiry agent and baroness Clara Linz of Advice Limited (1936; "most of her work has the potential to cause scandals and international financial crises"). Although she is no fan of The Deliberate Detective (1914; "this book is Bad"), she declares, "you can pry The Great Impersonation from my cold, dead hands."
Posted by Elizabeth Foxwell at 4:06 AM No comments:

Proficient hit-man Claude (Vince Edwards) experiences difficulties when he learns about his next assignment: killing a female witness about to testify in a trial. 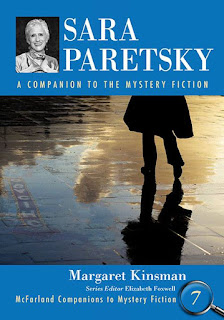 In a holiday sale, McFarland is offering a 30 percent discount on two or more books ordered from its new true crime and mystery catalog. These include the McFarland Companions to Mystery Fiction series that I edit.
Posted by Elizabeth Foxwell at 4:06 AM No comments:


In the second film version of The 39 Steps, Kenneth More takes on the role of John Buchan's game-hunter hero who becomes embroiled in espionage.


Long before the Detection Club's round-robin mystery The Floating Admiral (1931), there was "As Far as They Had Got," which appeared in the September 1911 issue of The Strand magazine and included Richard Marsh (The Beetle), Arthur Morrison (Martin Hewitt, Investigator), and spy novel pioneer E. Phillips Oppenheim among its authors. The Strand dubbed it a "Follow-My-Leader Story." Most of the authors provided a footnote that outlined an ending to the story, but they did not have access to these proposed endings as they wrote their particular section.

The story centers on two men out for sail on a river who become ensnared in the aftermath of the Moorgate Street robbery. The story takes a number of twists and turns.
Posted by Elizabeth Foxwell at 4:04 AM No comments: