Villanova's Falvey Memorial Library announced that it has received a nearly $350,000 grant from the National Endowment for the Humanities to continue digitizing dime novels in partnership with Northern Illinois University (Nickels and Dimes collection, which offers research opportunities), Bowling Green State University, Oberlin, and Stanford. Comments by Falvey's Demian Katz indicate that the concentration will be on works issued by Street & Smith, a major dime novel publisher.

The project has provided many valuable mystery-related works, including those by female authors such as Mary Elizabeth Braddon, Anna Katharine Green, and Metta Fuller Victor (aka Seeley Regester).

Amid the large body of work of veteran actor Brian Dennehy, who died on April 15, is the TV movie Perfect Witness (1989),  in which he appears as a district attorney wishing to prosecute a mob killing, but the witness (Aidan Quinn) faces threats to his family.

Looking for something mystery-related to listen to during an extended period at home? L.A. Theatre Works has the following program available on Sound Cloud:

• John Ball's In the Heat of the Night

In Million Dollar Weekend, stockbroker Gene Raymond faces blackmail and ruination when he decides to embezzle funds from his firm. Raymond also directs and shares a writing credit on the film.


The librarians at Northern Illinois University's Digital Library have suggestions to offer for virtual projects for undergraduates and others involving the Nickels & Dimes collection.
Posted by Elizabeth Foxwell at 4:07 AM No comments:

When a woman is murdered after having an affair with Dutch painter Jan Van Rooyen (Hardy Kruger), Van Rooyen finds that he is the top suspect of Inspector Morgan (Stanley Baker). Costars include Michelene Presle, Gordon Jackson, and Robert Flemyng. 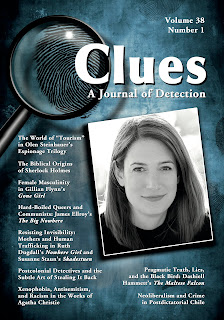 Clues 38.1 has been published; the abstracts follow below. Contact McFarland to order the print issue.  Ebook versions are available: GooglePlay, Kindle, and Nook

“Floating Unmoored”: The World of “Tourism” in Olen Steinhauer’s Espionage Trilogy / ROBERT LANCE SNYDER (University of West Georgia)
Olen Steinhauer’s espionage trilogy dramatizes its protagonist’s struggle to forge a centered identity after years of service as a black-ops agent in the CIA’s fictive Department of Tourism. By committing himself to his wife and stepdaughter, Milo Weaver escapes a downward spiral into suicidal disintegration captured by the trope of “floating unmoored.” The series’ recursivity involves structural elements that can be identified as momentum and world-building.

Hard-Boiled Queers and Communists: James Ellroy’s The Big Nowhere / JOSHUA COMYN (Trinity College, University of Melbourne)
This article argues that the characterization of the killer in James Ellroy’s The Big Nowhere (1988), together with Ellroy’s development as a novelist, can be illuminated through the representation of psychoanalysis and Marxism within the novel, as well as by the historical context of the novel’s fictional setting.