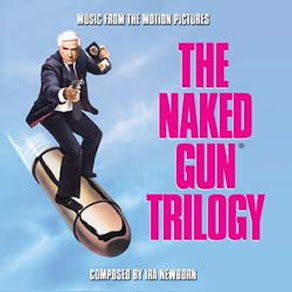 Good news for Frank Drebin fans: Film Score Monthly announced that La La Records has released a limited edition of Ira Newborn's scores for The Naked Gun: From the Files of Police Squad, The Naked Gun 2 1/2: The Smell of Fear, and The Naked Gun 33 1/3: The Final Insult.

Posted by Elizabeth Foxwell at 10:20 AM No comments:

The Irish Humanities Alliance offers a podcast on "The Success of International Crime Fiction," drawing from a June 2014 conference at Queen's University Belfast. Discussing the topic (and the flexibility of crime fiction to encompass all sorts of commentary) are Kate Quinn (University of Galway), who presented a paper on crime fiction in Chile; writer Garth Carr; and David Platten (University of Leeds).
Posted by Elizabeth Foxwell at 4:07 AM No comments:

In Alias John Preston, wealthy Christopher Lee arrives in an English village, has disturbing dreams, and may have a dark secret in his past. Psychiatrist Alexander Knox delves into the case. 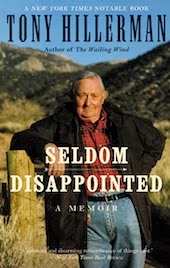 Debuting at the University of New Mexico Libraries is the Tony Hillerman Portal, which seeks to provide "an interactive guide to the life and work of Tony Hillerman." It includes the online exhibition "Tony Hillerman: From Journalist to Novelist"; maps of Southwest locations in the books The Blessing Way, The Boy Who Made Dragonfly, Dance Hall of the Dead, and Listening Woman; and audio and video interviews with the creator of tribal police officers Joe Leaphorn and Jim Chee, who died in 2008.
Posted by Elizabeth Foxwell at 4:03 AM No comments:

For those looking for mystery reading group guides:

• Michigan Center for the Book has a Reading Guide to Robert Traver's Anatomy of a Murder.

In Knight without Armor, British secret agent Robert Donat must rescue aristocrat Marlene Dietrich from Bolshevik baddies. The film (produced by Alexander Korda) is based on Without Armor by Lost Horizon's James Hilton, with a screenplay by early Hollywood pioneer Frances Marion.

"Behind the Badge:
The US Postal Inspection Service."

The new exhibition "Behind the Badge: The U.S. Postal Inspection Service" at the Smithsonian's National Postal Museum includes famous scammers such as Charles Ponzi, a forged Robert Frost poem, counterfeit stamps, mail heists, assaults and murders of postal employees, and other cases involving the service such as that of the Unabomber.
Posted by Elizabeth Foxwell at 4:03 AM No comments:

Pacifica Radio's From the Vault archival program is featuring a 1976 conversation between sci-fi author Philip K. Dick and Pacifica Radio's Mike Hodel. Topics include Richard Congdon, Harlan Ellison, Richard Lupoff, Kurt Vonnegut, the business of writing, A Scanner Darkly, The Man in the High Castle, and the first story sold by Dick (to Anthony Boucher who was, in Dick's words, "a great writer, a great editor, a great anthologizer, and a great person").
Posted by Elizabeth Foxwell at 4:01 AM No comments:

A recent article by Bill Phillips (University of Barcelona) is on "Religious Belief in Recent Detective Fiction." Some of the authors mentioned are Ken Bruen, James Lee Burke, G. K. Chesterton, Sara Paretsky, Robert B. Parker, and Ian Rankin.
Posted by Elizabeth Foxwell at 4:03 AM No comments:

The smash play "The Bat" written by Mary Roberts Rinehart and Avery Hopwood first appeared on screen in this silent film version of 1926. The cast included Jack Pickford (brother of Mary).


Posted by Elizabeth Foxwell at 4:08 AM No comments:

For the blog of Academe magazine (published by the American Association of University Professors), Martin Kich (Wright State University) is crafting a series of posts on "Fifty Notable American Espionage Novels" (he is up to no. 29). His choices include the following:

In A Shriek in the Night, reporter Ginger Rogers teams up with rival journalist Lyle Talbot to investigate murders in an apartment building.

As a fan of Dell mapbacks, I'm enjoying prowls through the 1940s-70s cover art in the Vintage Paperback Index at Bowling Green State University's Browne Popular Culture Library. Mystery authors represented include Lawrence Goldtree Blochman, Robert M. Coates, George Harmon Coxe, Mignon G. Eberhart, A. A. Fair (aka Erle Stanley Gardner), Leslie Ford, Brett Halliday, Dashiell Hammett, Geoffrey Homes, Baynard Kendrick, Helen McCloy, Zelda Popkin, Mary Roberts Rinehart, Rex Stout, and Phoebe Atwood Taylor. It's also not without its pleasant surprises such as the inclusion of Lloyd C. Douglas (The Robe, Magnificent Obsession) for Doctor Hudson's Secret Journal and C. W. Grafton (father of Sue) for The Rope Began to Hang the Butcher and The Rat Began to Gnaw the Rope. In addition, there are items for western fans (The Law at Randado by Elmore Leonard) and sci-fi aficionados (Rocket to the Morgue by Anthony Boucher; Invasion from Mars ed. Orson Welles).
Posted by Elizabeth Foxwell at 4:04 AM No comments:

CBC's "100 Novels That Make You Proud to Be Canadian." 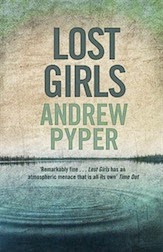 CBC Books (of the Canadian Broadcasting Corp.) has issued its list of "100 Novels That Make You Proud to Be Canadian," which includes the following mystery works:

Some Rod Serling items I discovered:

• Binghamton, NY, is moving its Walk of Fame for preservation reasons. The first star was given posthumously to native son Serling.

• At a May 1971 UCLA event, an often witty and blunt Serling commented on Twilight Zone episodes "The Monsters Are Due on Maple Street" and "A Stop at Willoughby"; Night Gallery episode "They're Tearing Down Tim Riley's Bar";  and the Hallmark Hall of Fame production "Storm in Summer." As can be expected given Serling's continual criticism of television, he had things to say about the state of TV in general:


"It . . . points out one of the major, in-bred problems of television: that however moving and however probing and incisive the drama, it cannot retain any consistent thread of legitimacy when after 12 or 13 minutes, out come 12 dancing rabbits with toilet paper."

He plugged science fiction authors such as Arthur C. Clarke and a young filmmaker by the name of George Lucas ("Science fiction is becoming an altogether legitimate art form") and good writing ("You judge good writing by its lasting quality . . . nothing I've written in my life . . . will ever be remembered 100 years hence"). He considered his best work to be "Requiem for a Heavyweight," The Rack, and Seven Days in May.
Posted by Elizabeth Foxwell at 4:03 AM No comments:

Directed by Henry Hathaway and based on Warrant for X (aka The Nursemaid Who Disappeared) by author-screenwriter Philip MacDonald (The List of Adrian Messenger, etc.), 23 Paces to Baker Street features Van Johnson as a blind playwright who overhears a kidnapping plot.