Screenwriter Liam O'Brien created the scenario for the 1960 TV series Johnny Midnight. It starred his brother, Edmond O'Brien, as an actor turned PI investigating crimes in the New York theatrical world, often drawing on his talent for disguise and usually involving some sort of fight sequence. In the episode "Somebody Loves You," Johnny looks into the suicide attempt of a celebrated Swedish actress. J. Pat O'Malley costars.

Matthew Surridge on The Best of Manhunt.

On Splice Today, Matthew Surridge reviews Stark House Press's The Best of Manhunt, an anthology of stories from an important crime fiction magazine that published authors such as Lawrence Block, David Goodis, Evan Hunter, John D. MacDonald, and Donald Westlake.
Posted by Elizabeth Foxwell at 4:06 AM No comments:

In Find the Blackmailer, private detective Jerome Cowan goes on the trail of a talking crow, which can implicate politician Gene Lockhart in blackmail and murder.

Elisabeth Ellicott Poe (1886–1947) and Vylla Poe Wilson (1883–1969) trained women for national service during World War I and were longtime society and culture reporters for the Washington Post. Dubbed "the Poe Sisters," they were related to Edgar Allan Poe (their great-grandfather was a brother of Poe's grandfather). They were steadfast champions of their relative's work, with Elisabeth writing at least 20 articles on Poe's life and work; Vylla reviewing Dorothy Dow's take on Poe, Dark Glory, for the Post in January 1932; and the sisters establishing a short-lived, Poe-related journal, The Stylus, and coauthoring Poe: A High Priest of the Beautiful (1930). Elisabeth also painted, with some critics stating that her imagery resembled Poe's.

From May to June 1922, the sisters published "The Missing Number," a serial in 18 parts, in the Post. This mystery about the disappearance of a diplomat's wife in Washington, DC, that involves a Poe-like number cipher was trumpeted by the Post as "the first Poe mystery story in 73 years!" (see below). It featured a sleuthing female reporter, a disreputable medium, an energetic policeman, and more than one distraught family member and sinister servant. Although "The Missing Number" provided an interesting look at Washington life of the time (remember streetcars?), it is a not very successful literary work. It has an unknown half-brother (cheating, for many mystery writers and readers), some cloying romance, and portrayals of African Americans and a deaf-mute that would likely be unpalatable to modern readers.

The return of Dorothy Bowers. 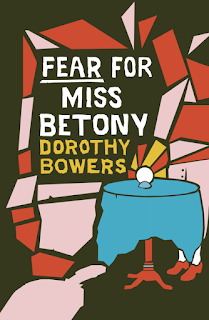 In the Shropshire Star Keri Trigg discusses the reprinting by Moonstone Press of the five detective novels of Dorothy Bowers (1902–48), a member of the Detection Club adept in the "fair play" mystery who died young from tuberculosis.

• The Bells at Old Bailey (Detective Inspector Raikes, 1947. "a literate and entertaining excursion into murder"—Jack Glick, New York Times)
Posted by Elizabeth Foxwell at 4:08 AM No comments:

Based on The Black Path of Fear by Cornell Woolrich, The Chase features Robert Cummings as a troubled World War II veteran who becomes chauffeur to gangster Steve Cochran and entangled with Cochran's wife (Michele Morgan). Peter Lorre costars.

New exhibition on Rex Stout and his work. 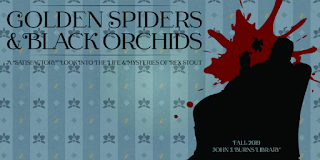 The Burns Library at Boston College, the depository of Rex Stout's papers, has opened the exhibition "Golden Spiders and Black Orchids: A 'Satisfactory' Look into the Life and Mysteries of Rex Stout." The exhibition, which features Stout’s fiction and its adaptations, his activism, his pastimes, and his fandom, has interesting items such as a Nero Wolfe comic strip and Nero Wolfe postage stamps from San Marino and Nicaragua. The exhibition is on view until January 2020.
Posted by Elizabeth Foxwell at 4:08 AM No comments: