Blanche Knopf, who cofounded the publishing firm named for her husband Alfred in 1915 and worked with writers such as Dashiell Hammett and James M. Cain, was born today in New York City in 1894. John Thornton, who is working on a biography of the Knopfs at UT-Austin, discusses his work here.
Posted by Elizabeth Foxwell at 5:02 AM No comments:

The blog Letters of Note features letters from science fiction author Philip K. Dick to the FBI regarding individuals approaching him to place coded messages in his books.
Posted by Elizabeth Foxwell at 5:04 AM No comments: 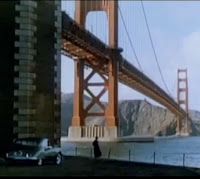 The San Francisco History Center has guest edited the July/August issue of the NextReads San Francisco newsletter, listing mysteries set in the city by the bay. (Hat tip to What's on the 6th Floor, which promises future posts on mystery-related topics)

About the image: Scene from Vertigo (dir. Alfred Hitchcock, 1958)
Posted by Elizabeth Foxwell at 5:03 AM No comments: 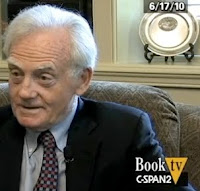 BookTV talks to Malcolm O'Hagan, president of the proposed American Writers Museum that would honor the literary heritage of the United States (let's hope genre fiction authors would be equally recognized).
Posted by Elizabeth Foxwell at 5:04 AM 2 comments:

Hugh "Bulldog" Drummond, Sapper's adventurous ex-World War I captain, is featured this week on BBC Radio 7, read by Julian Rhind-Tutt (The Heat of the Sun, etc.). Go here for the schedule or to listen; episodes can usually be heard for a week after broadcast.
Posted by Elizabeth Foxwell at 5:01 AM No comments:

On the Wonders and Marvels blog, Catherine Delors discusses the Rue Nicaise bombing of 1800 that attempted to end the life of Napoleon, stating that it is "considered the first modern police investigation." The case is the basis for Delors's new novel For the King.

About the image: Napoleon at Fontainebleu, ca. 1814. Library of Congress, Prints and Photographs Division
Posted by Elizabeth Foxwell at 5:06 AM 1 comment:

On the Great War blog, George Simmers reports on the "Buchan and the Idea of Modernity" conference held at University of London on July 10, which included discussions of the Richard Hannay novels Mr. Standfast (1919) and The Three Hostages (1924) and Buchan as a Scottish writer.  (Go here to see the conference program)

About the image: John Buchan, Library of Congress, Prints and Photographs Division.
Posted by Elizabeth Foxwell at 5:05 AM No comments:

The recent healthy prices for the works of Ian Fleming continued at the Sotheby's July 15th English literature auction when a copy of Diamonds Are Forever (1956) went for £1,875 (approximately $2,870).

(Hat tip to PhiloBiblos)
Posted by Elizabeth Foxwell at 5:02 AM 2 comments:

Mad dogs and Englishman detect ... Actor-director-playwright-composer Noel Coward adds investigator to his long resume in Marcy Kahan's Design for Murder this week on BBC Radio 7. Go here for the schedule or to listen; episodes can usually be heard for a week after broadcast.

About the image: Noel Coward in Our Man in Havana (dir. Carol Reed, 1959)
Posted by Elizabeth Foxwell at 5:03 AM No comments:

Joseph Hansen, creator of groundbreaking gay investigator Dave Brandstetter, was born today in Aberdeen, South Dakota, in 1923. He was nominated for Edgars for "The Anderson Boy" and "McIntyre's Donald," for a Shamus for Gravedigger (1982), and for a Shamus for "Merely Players." He also received the lifetime achievement award from the Private Eye Writers of America and Lambda Literary Awards for A Country of Old Men (1991) and Living Upstairs (1993). Four of his poems were set to music in a piece called Vocalese by composer Richard Rodney Bennett, best known for his scores for Murder on the Orient Express and Four Weddings and a Funeral. Hansen died in 2004.


"almost all the folksay about homosexuality is false. So I had some fun turning cliches and stereotypes on their heads."—Joseph Hansen, qtd. in Contemporary Authors.

The near-detonation of Doctor Doolittle.

Joseph Pugh of the UK's National Archives discusses entertaining aspects of the archives' records relating to film, including an attempt by explorer Sir Ranulph Fiennes (a cousin of Ralph) to blow up the set of Doctor Doolittle.

About the image: Rex Harrison, apparently not a favorite of Sir Ranulph Fiennes. Doctor Doolittle, dir. Richard Fleischer, 1967.
Posted by Elizabeth Foxwell at 5:05 AM No comments:

Some of the Strand's rare mystery offerings.

Some of the Strand Bookstore's rare mystery-related offerings:

Staff from Chicago's Seminary Co-op Bookstore pick their favorite graphic works (listed here and here), such as Strange Suspense: The Steve Ditko Archives (vol. 1), The Cartoon Introduction to Economics (if only this had been published before I suffered through my micro-macro econ course),  and Donald Westlake's and Darwyn Cooke's Parker: The Hunter. My favorite is Action Philosophers ("Plato! Wrestling Superstar of Ancient Greece!").
(Thanks to UChiBLOGo)
Posted by Elizabeth Foxwell at 5:04 AM No comments: 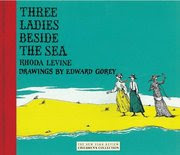 Today New York Review of Books Classics reissues Three Ladies by the Sea, a collaboration between Edward Gorey and Rhoda Levine that has been out of print since the 1970s. As Goreyana notes, the book is dedicated to Emma Watson (daughter of Julie Andrews) and composer Sandy Wilson (best known for The Boy Friend). NYRB Classics offers a preview of Gorey's drawings for the book here.
Posted by Elizabeth Foxwell at 5:02 AM No comments:

Ellis Peters's ex-soldier monk is featured this week on BBC Radio 7, in Light on the Road to Woodstock (drawn from Peters's A Rare Benedictine, 1988, which focuses on what led Brother Cadfael to join the Benedictines). Go here for the schedule or to listen; episodes can usually be heard for a week after broadcast.
Posted by Elizabeth Foxwell at 5:05 AM No comments:

Philadelphia bad boy gets his own
literary society.

The crusading George Lippard (1822–54), a friend of Edgar Allan Poe and a member of the Philadelphia Gothic school with works such as the best-selling The Quaker City; or, the Monks of Monk Hall (1844), now has his own literary society, thanks to Edward Pettit. (Hat tip to PhiloBiblos. About the image: Author-journalist George Lippard, ca. 1850. Library of Congress, Prints and Photographs Division.)
Posted by Elizabeth Foxwell at 5:01 AM 1 comment:

Not much mystery action at June 23rd Bloomsbury auction.

The June 23rd Bloomsbury auction that received press for the lack of interest in some of the Steinbeck items also displayed tepid attention to the mystery-related offerings:
There was also a completely delightful inscribed copy of Christopher Morley's I Know a Secret for Dorothy Parker, in which Morley drew pixies (valued bet. $1200–1800, unsold).
Posted by Elizabeth Foxwell at 5:02 AM No comments:

TLS: Judith Flanders on authors of the first
female detectives. 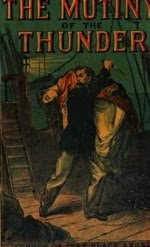 In the June 18 Times Literary Supplement, British novelist and journalist Judith Flanders discusses the first known female fictional detectives, particularly those pertaining to Experiences of a Lady Detective (aka Revelations of a Lady Detective, 1884; attributed to W. S. Hayward, but there is controversy about that); accounts based on the Constance Kent case (most recently the subject of Kate Summerscale's The Suspicions of Mr. Whicher); and a convincing unmasking of the pseudonymous Andrew Forrester Jr. (The Female Detective, ca. 1863). Unfortunately, Flanders's piece only appears to be available in the TLS print edition. Clues 25.1 (2006) and 26.3 (2008) featured articles that discussed Victorian female sleuths; the author of one, Dagni Bredesen of Eastern Illinois University, is working on scholarly editions of The Female Detective and Revelations of a Lady Detective.

Also of interest in the June 18th TLS: Michael Dirda's recollections as an assistant editor of the Washington Post Book World: "Elmore Leonard confessed that he was tired of being asked to review gritty crime novels, so I talked him into writing about the latest Anita Brookner" (16). Readers might also peruse Jonathan Barnes's June 23rd discussion (available online) of Arthur Conan Doyle's "The Creeping Man" (1923), in the context of a review for the 56-volume The Complete Works of Arthur Conan Doyle (Cambridge Scholars Publishing, 2009).

About the image: The Mutiny of the Thunder (1878) by W. S. Hayward, one of the authors discussed in Judith Flanders's June 18th TLS article.
Posted by Elizabeth Foxwell at 5:02 AM No comments:

On BBC Radio 7 this week, ex-Dr. Who David Tennant reads Pamela Branch's The Wooden Overcoat (1951, rpt. Rue Morgue P, 2006)—where inconvenient bodies litter the Asterisk Club, a home for wrongfully acquitted murderers. Go here for the schedule or to listen; episodes can usually be heard for a week after broadcast.
Posted by Elizabeth Foxwell at 5:03 AM No comments:

Welcome reissues from Rue Morgue Press include The Puzzle of the Silver Persian (1934) by Stuart Palmer, in which Hildegarde Withers, the intrepid schoolteacher-sleuth, encounters murder on a passenger ship. Also out:  The Yellow Violet (1942) by Frances Crane and Corpse Diplomatique (1950) by Delano Ames, not to mention the sorely needed reissues of the works of Manning Coles, such as Drink to Yesterday (1940).

About the image: Edna May Oliver, who played Hildegarde Withers in three films, NYPL.
Posted by Elizabeth Foxwell at 5:01 AM No comments:

On the Great War blog, George Simmers discusses Philip MacDonald's novel Patrol (1927; films 1929, 1934). The talented MacDonald is probably best known for The List of Adrian Messenger (1959, film 1963) and Warrant for X (aka The Nursemaid Who Disappeared, adapted as the film Twenty-Three Paces to Baker Street [dir Henry Hathaway, 1956]).

Simmers follows up this post with speculation on the identity of a character in John Buchan's Richard Hannay novel Mr. Standfast (1919): Could it be a thinly disguised D. H. Lawrence?

About the image: Victor McLaglen in The Lost Patrol (adapted from Philip MacDonald's Patrol, dir. John Ford, 1934)
Posted by Elizabeth Foxwell at 5:05 AM No comments: