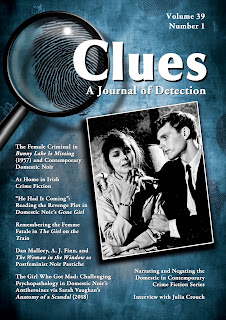 Volume 39, no. 1 (2021) of Clues: A Journal of Detection—a theme issue on domestic noir guest edited by Eva Burke and Clare Clarke—has been published. The abstracts follow below. To order the issue or a subscription, contact McFarland.

Update, 5-10-21. This issue is now available on Kindle and Google Play.

Introduction: Domestic Noir
EVA BURKE AND CLARE CLARKE (Trinity College Dublin)
The guest editors discuss the development of the domestic noir subgenre and the contents of this theme issue of Clues, including an interview with British author Julia Crouch, who coined the term domestic noir, and articles on Irish and Scandinavian domestic noir; women’s book groups; mid-century antecedents of domestic noir; and authors such as A. J. Finn (aka Dan Mallory), Gillian Flynn, Tana French, Paula Hawkins, and Evelyn Piper (aka Merriam Modell).

“I Am Not the Girl I Used to Be”: Remembering the Femme Fatale in The Girl on the Train
ROSIE COUCH (Cardiff University)
This article situates Rachel from Paula Hawkins’s novel The Girl on the Train (2015) as a contemporary incarnation of the femme fatale, redeployed within the domestic noir subgenre. The analysis demonstrates how Rachel’s perspective works to enact a feminist backlash against postfeminist rhetoric.

The Girl Who Got Mad: Challenging Psychopathology in Domestic Noir’s Antiheroines  via Sarah Vaughan’s Anatomy of a Scandal (2018)
LIZ EVANS (University of Tasmania)
The author argues that Sarah Vaughan’s legal thriller Anatomy of a Scandal (2018) challenges domestic noir’s questionable tendency to pathologize anger and badness in its female protagonists (often depicted as survivors of rape or abuse) while showing how the persistent alignment of negative emotion with psychological instability undermines these central characters by impeding their self-agency.

Smoke and Mirrors: Dan Mallory, A. J. Finn, and The Woman in the Window as Postfeminist Noir Pastiche
ROBERTA GARRETT (University of East London)
The author discusses The Woman in the Window by A. J. Finn (pseudonym of Dan Mallory), examining Finn’s treatment of female characters and the tropes of the noir and domestic noir subgenres through the lens of postfeminist criticism.

“He Had It Coming”: Reading the Revenge Plot in Domestic Noir’s Gone Girl (2012)
KATHARINA HENDRICKX (University of Sussex)
This article examines Gillian Flynn’s Gone Girl (2012) and its popularity with female readers. It suggests that female readers are not only interested in the portrayal of women’s experiences but also engage with the depiction of the revenge plot, which allows women readers to negotiate their frustration and anger with the current postfeminist climate.

Home and Home-Less:  Narrating and Negating the Domestic in Contemporary Crime Fiction Series
ELSPETH LATIMER (University of East Anglia)
The Annika Bengtzon series by Swedish author Liza Marklund challenges the evasion of domesticity typically seen in contemporary crime fiction series. By engaging with themes prevalent in domestic noir and by redirecting “the hero’s journey” toward self-discovery rather than outward conquest, Marklund feminizes the traditionally masculine conventions of the series form.

Interview with Julia Crouch
EVA BURKE (Trinity College Dublin)
Author Julia Crouch discusses the origins of the term domestic noir; the roles of women, class, and trauma in such works; and aspects of characters and readership.

Killing Bluebeard: Claiming Subversive Femininity in Agatha Christie’s “Philomel Cottage” and The Stranger
MARY ANNA EVANS (University of Oklahoma)
This article considers the traditional tales that serve as source texts for Agatha Christie’s 1924 story “Philomel Cottage” and its 1932 adaptation, The Stranger, revealing an intertextuality that speaks to the ongoing societal evolution that underpins her narratives and interrogating ways that crime literature addresses women’s treatment by their society’s laws.

Antoine Dechêne. Detective Fiction and the Problem of Knowledge: Perspectives on the Metacognitive Mystery Tale.
DOMINQUE JEANNEROD (Queen’s University Belfast)
Posted by Elizabeth Foxwell at 4:08 AM