The Unholy Four aka The Stranger Came Home (1954).

Based on Stranger at Home ghosted for actor George Sanders by noted sci-fi writer and Big Sleep screenwriter Leigh Brackett, The Unholy Four features a man with amnesia seeking to discover which of his friends tried to kill him. Paulette Goddard stars.

BBC Radio 4 Extra is beginning to air excerpts from tapes made by Agatha Christie as she prepared her autobiography. The first episode is "The Semi-Pro" in which she discusses the creation of Miss Marple and also states: "I was eminently a writer for entertainment."
Posted by Elizabeth Foxwell at 4:08 AM No comments:

Based on The Vanishing Corpse (1941) by the Detection Club's Anthony Gilbert, They Met in the Dark features James Mason, Joyce Howard, and David Farrar in a tale of a disgraced naval officer, murder, and wartime espionage.

Meyer on The Seven Per-Cent Solution. 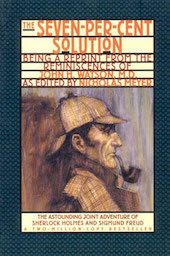 In this thoughtful 1981 event of the Writers Guild Foundation focused on adaptation, director-writer Nicholas Meyer discusses issues encountered in adapting his novel The Seven Per-Cent Solution to the screen. There also is interesting coverage of the novel versus film of Brian Garfield's Death Wish and Meyer's film Time After Time that pitted H.G. Wells against Jack the Ripper. Says Meyer:


I feel that if you are taking the life of someone famous as being worthy of making a film about, he or she is worth making an accurate film about. It is peculiarly revolting to me to watch biographical films that have felt the irresistible need to improve the lives of their subjects in order to render them sufficiently palatable or entertaining to an audience.

Meyer also states, "I am troubled by the fact that we now place more emphasis and importance on packaging than what is being packaged
. . . . Where does dramatic license end and vandalism begin?"

Of related interest: I Hear of Sherlock Everywhere podcast interview with Meyer
Posted by Elizabeth Foxwell at 4:11 AM No comments:

In this episode from Four Star Playhouse, Dick Powell is a self-satisfied newspaper columnist who writes about panic, which triggers a threat to his life. Dorothy Malone co-stars as a copyeditor with a background in psychology. 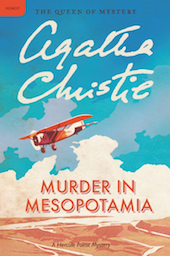 The University of Pennsylvania Museum of Archaeology and Anthropology uncovered a photo in its archives of a "Mrs. Mallowan"; archivists realized that she was known better by another name: Agatha Christie. Christie was visiting a UChicago-Penn excavation at Nippur in Mesopotamia with her second husband, archaeologist Max Mallowan, ca. late 1940s/early 1950s.
Posted by Elizabeth Foxwell at 4:02 AM No comments:

An actor is suspected of murdering a producer in this film scripted by famous blacklisted screenwriter Dalton Trumbo (whose 110th birthday falls on December 9). 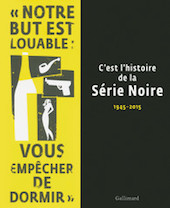