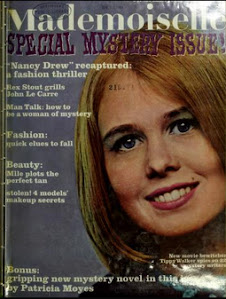 Bonuses for Nancy Drew and Patricia Moyes fans: There's a piece on the girl sleuth plus Moyes's novel Falling Star in the issue. Also, pp. 62–63 features a photo that includes Edgar awardees of that year and other MWA members. Among the luminaries, one can spot Clayton Rawson, Hillary Waugh, and Lawrence Treat in the back; Stout and Dorothy Salisbury Davis in the middle; Howard Haycraft in the front row at left; and Phyllis Whitney in the front row at right.

Over on The Wrap, Ross A. Lincoln talks about the film Sally Floss: Digital Detective, directed by James Cullen Brassack, which is due out this summer. In the film, the smart Sally starts an internet-based detective agency when her family faces financial hardship. The cast includes Tara Reid, Eric Roberts, and Lindsay Elston. You can watch a trailer for the film at The Wrap's website. 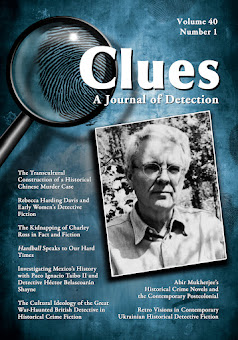 Volume 40, no. 1 (2022) of Clues: A Journal of Detection—a theme issue on historical crime fiction guest edited by Rosemary Erickson Johnsen—has been published. The issue abstracts follow below; contact McFarland to order a print copy.

Update, May 1, 2022. The ebook versions of the issue are now available: Kindle, Nook, Google Play

We are happy to have the essay of professor emeritus Fred Erisman, who was a contributor to the first issue of Clues in 1980. Unfortunately, I do not have an update on our Ukrainian contributor who had to flee her town due to Russian bombing.

Historical Crime Fiction: A Cushion on the Seat
ROSEMARY ERICKSON JOHNSEN (Governors State Univ)
The guest editor of Clues 40.1 on historical crime fiction provides a brief history of related scholarship and discusses post–WWI India-set series by Massey and Mukherjee as representative of emerging trends. She previews the issue's articles on mysteries set in China, India, Latin America, Ukraine, and the United States.

Caroline Reitz, the executive editor of Clues, discusses two essays that appear in Clues 40.1 and a new call for submissions on pedagogy.

In Peterson’s Magazine, Rebecca Harding Davis developed one of American fiction’s earliest recurring detective figures in several mysteries that foreground the antebellum South as a historical setting. These stories illustrate the genre’s productive intersection with the gothic, destabilize narratives of the past, and complicate the detective’s traditional role in restoring social order.

The settings of Sara Paretsky’s Hardball are Chicago’s glittering but decrepit political scene in the late 2000s and an open housing march led by Dr. Martin Luther King Jr. in 1966 that became volatile and violent. Hardball’s instructional text shows the contemporary consequences of systemic racism stemming from Jim Crow laws, the development of police power, and waves of immigration.

Investigating Mexico’s History with Paco Ignacio Taibo II and Detective Héctor Belascoarán Shayne: On Which Side Are You?
PATRICIA VARAS (Willamette Univ)

This essay examines Paco Ignacio Taibo II’s approach to history as an effort to capture or rewrite well-known yet forgotten episodes in Mexican history. By retelling the 1971 Corpus Christi student massacre, channeling Pancho Villa’s ghost, and recovering Aztec artifacts in his novels, he ensures that his readers will not forget this history, providing a controversial insight into today’s Mexico.

The series by contemporary Ukrainian writer Bogdan Kolomiychuk presents the adventures of police officer Adam Vistovych in Lviv (aka Lemberg). The author’s depiction of the Austro-Hungarian Empire in the early-twentieth century and its colony—Ukraine—highlights the social, political, national, and historical aspects of the mystery genre.

This article compares the differences between Carrie Hagen’s nonfiction reconstruction of the 1874 kidnapping of Charley Ross and Mark Graham’s use of this event in his historical mystery. The main emphasis is how details of the actual event are altered to fit the requirements of each narrative form.

This article explores the cross-cultural adaptations of a historical Chinese murder case. Focusing on three key texts published by An He in 1809, Wu Jianren in 1904, and Robert van Gulik in 1958, it investigates the potential of historicity to be used by authors of crime fiction to address concerns of their own times.

This article examines the cultural ideology underlying the constructions of the war-haunted detective in the historical crime fiction series by Rennie Airth, Jonathan Hicks, Charles Todd, and Jacqueline Winspear. These (re)imaginings of the Great War demonstrate the capacity of this literary genre to perpetuate the futility myth in the contemporary cultural memory of the 1914–18 British experience.

ESSAYS
Time and Detective Novels: Exploring the Past and the Night in Ian Rankin’s John Rebus Series
IAN R. COOK (Northumbia Univ)
Given that time is an important theme within detective novels, this article explores the portrayal of time in Ian Rankin’s John Rebus series. More precisely, it draws on the concepts of temporality and relationality to critically examine two important temporal dimensions in the series: the past and the night.

Dick Francis and the Fine Arts
FRED ERISMAN (Texas Christian Univ)
Apart from P. D. James with Adam Dalgleish, mystery authors have rarely used an artist as their protagonist. Between 1972 and 2000, Dick Francis wrote seven such books, contrasting the artist’s world with the professional detective’s and exploring ways in which art equips the amateur to be as effective a crime-solving entity as the professional.

The UNC Libraries online exhibition "Teaching with Mass-Market Paperbacks" draws on the paperback collection of UNC Chapel Hill to assist instructors who wish to use such works in their classroom. Some sample lesson plans are provided. Mystery books include assorted works by Dashiell Hammett and Raymond Chandler; The Blue Geranium by Dolan Birkley (aka Dolores Hitchens); The Couch by Robert Bloch; Honeymoon in Hell by Fredric Brown; Cassidy's Girl by David Goodis; A Taste for Honey by H. F. Heard; I Married a Dead Man and other works by William Irish (aka Cornell Woolrich); and Sorry, Wrong Number by Allan Ullman and Lucille Fletcher (as the cover notes: "She Dialed .. D-E-A-T-H").