On October 21, the New York Adventure Club is offering the virtual webinar "Agatha Christie: Unraveling the Mystery Behind the Queen of Crime" with tour guide Simon Whitehouse. It will include London locales of Christie's works and life, including where the royal premieres of film adaptations were held; as well as background on her career and 1926 disappearance. Tickets are $10. The webinar will be available for a limited time after the event. 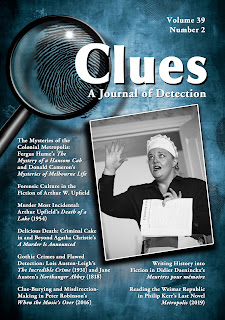 Volume 39, no. 2 (2021) of Clues: A Journal of Detection has been published. The issue abstracts follow below; contact McFarland to order a print copy. I will update this post once the ebook versions are available.

Australian Rules: Forensic Culture in the Fiction of Arthur W. Upfield
BETTY J. BRUTHER
Four novels in Arthur W. Upfield’s Napoleon Bonaparte series—Winds of Evil (1937), Death of a Swagman (1946), The Widows of Broome (1950), and The Bachelors of Broken Hill (1950)—deal with multiple murders committed by a single individual in the outback. Each novel reveals the forensic culture of Australia: common investigative techniques, criminal profiling, forensic psychology, and the examination and interpretation of temporary trace evidence on the landscape.

Murder Most Incidental: Arthur Upfield’s Death of a Lake (1954)
RACHEL FRANKS AND ALISTAIR ROLLS  (University of Newcastle)
Arthur Upfield is well-known for positioning an Aboriginal detective, Inspector Napoleon “Bony” Bonaparte, as the protagonist for his series. In Death of a Lake (1954), Upfield challenges the conventions of mid-twentieth-century Australian crime stories not only through privileging an Indigenous man but also through disregarding the central concept of the modern crime novel: murder.

Death in a Literary Context: Detective Novels of the Golden Age as Enacted Criticism
ANDREW GREEN (Brunel University)
This article explores the nature of Golden Age crime narrative. It argues that the works of these authors are “enacted criticism”—creative acts that are fundamentally critical responses to genre—that can be read as mutually constitutive meaning-making “spaces”—texts within which form is constantly renegotiated within a literary context.

Clue-Burying and Misdirection-Making in Peter Robinson’s When the Music’s Over (2016)
CHRISTIANA GREGORIOU (University of Leeds)
Close stylistic inspection of detective novel writing can shed light on the skill of weighing up interpretations. In When the Music’s Over, Robinson relies on readers’ schematic expectations, stereotypes, and prejudices to generate false leads and bury a killer into the narrative background until his significance needs to be foregrounded.

Writing History into Fiction in Didier Daeninckx’s Meurtres pour mémoire
JOHN GLEESON
This article demonstrates Didier Daeninckx’s unique blending of historical fact and fiction, particularly the use of state archives in his breakthrough novel Meurtres pour mémoire (1984). It also examines intertextual references to nineteenth-century writers and the French New Wave cinema that expand the traditional boundaries of the genre.

History Detective: Reading the Weimar Republic in Philip Kerr’s Last Novel Metropolis (2019)
NEIL H. DONAHUE (Hofstra University)
Philip Kerr’s last novel Metropolis (2019) returns his detective, Bernie Gunther, to 1928 as both prequel and epilogue to his series of 14 novels. This essay locates the key to Gunther’s identity and actions in his relation to arch-Nazi Arthur Nebe. 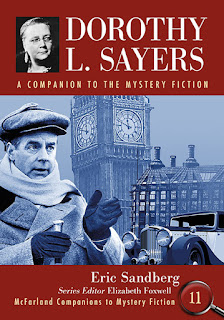 On October 1, I started as a full-time editor at McFarland & Co., where I'll be helping out with production-related operations and acquisitions (particularly in popular culture). I've had a long relationship with McFarland as editor of the McFarland Companions to Mystery Fiction series (six award nominations and one win; the next volume is vol. 11: Dorothy L. Sayers) and managing editor of Clues: A Journal of Detection (the oldest US scholarly journal on mystery, crime, and detective fiction). I'm looking forward to exploring new challenges.

I'm always interested in receiving proposals for the Mystery Companion series; prospective subjects should have a substantial body of work (loosely defined as a minimum of 25 books or a substantial combination of books, short stories, and other mystery-related works). For further details on submitting a proposal, contact me.

Posted by Elizabeth Foxwell at 6:08 AM 3 comments: