In Dancing with Crime, a London cab driver and his girlfriend (real-life spouses Richard Attenborough and Sheila Sim) take on a gang of criminals when the cabbie's best friend is killed.

An inspector (Lewis Stone) thinks that a jewel thief (Robert Montgomery) also is a serial killer of policemen, and the thief sets out to catch the murderer himself. Directed by Edgar Selwyn (a cofounder of Goldwyn Pictures), the film is based on Philip MacDonald's X v. Rex (aka The Mystery of the Dead Police). 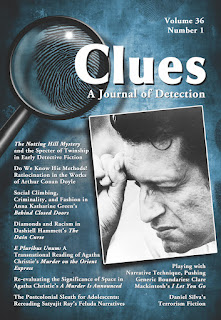 Clues 36.1 (2018) has been published; order the issue from McFarland. Abstracts are listed below.


E Pluribus Unum: A Transnational Reading of Agatha Christie’s Murder on the Orient Express
Stewart King (Monash University)
This article questions both the Englishness and generic stasis ascribed to Agatha Christie and argues that her Murder on the Orient Express (1933) displays an inherent transnationalism that questions the strict taxonomies supposedly separating the English clue-puzzle from the American private-eye novel.

Psychogeography and the Detective: Re-evaluating the Significance of Space in Agatha Christie’s A Murder Is Announced
Sarah Martin (University of Chester)
The author discusses the nature of the village space and its influential role in plot, character, and structure of Agatha Christie’s A Murder Is Announced. The concept of psychogeography unearths the true nature of space and its influence on the construction and preservation of social identity in the book.

Do We Know His Methods? Ratiocination in the Works of Arthur Conan Doyle
Jackie Shead
This article discusses Arthur Conan Doyle’s explanation of Sherlock Holmes’s methods, contrasting them with his presentation of the detective in action. It explores contradictions in the Holmes stories, suggesting Conan Doyle’s investment in a hyperrational sleuth is at odds with his intuitive understanding of detective methodology.
Read more »
Posted by Elizabeth Foxwell at 4:03 AM No comments:

Directed by Robert Siodmak (The Spiral Staircase, etc.), this adaptation of Cornell Woolrich's book features Ella Raines turning sleuth to exonerate her boss, who is accused of killing his wife.

Tomorrow is the last day to RSVP for the March 16 luncheon of the Association of the Oldest Inhabitants of DC where I'll be speaking on "DC Women in World War I." They include Adelia "Tess" Chiswell, a member of the Red Cross Motor Corps who served in France with future U.S. minister to Norway Daisy Harriman. I'll also be signing my book In Their Own Words: American Women in World War I.

The luncheon, which is open to nonmembers, will be held at Capitol Skyline Hotel (Metro stop: Navy Yard) from 12–2 pm and is $35 per person. To RSVP, visit the AOI Web site. 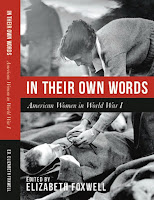 The real-life case involves the 1896 murders on the Herbert Fuller of Captain Charles Nash; his wife, Laura Nash; and August Blomberg, the second mate. Thomas M. C. Bram, the first mate, was convicted of the crimes in a second trial held in 1899 and originally was sentenced to death; his sentence was changed to life imprisonment after a Supreme Court appeal.

According to Rinehart (see "Mary Roberts Rinehart Shows How Truth Is Stranger Than Fiction" and her autobiography My Story), a Pittsburgh lawyer told her about the case, and she subsequently read about it in a magazine for lawyers. Her choice for the perpetrator was the ship's Scandinavian wheel-man, Justus Leopold Westerberg, who was nicknamed Charley Brown. Westerberg had tried to kill his nurse while he was a patient in a mental hospital. A fictionalized version of Brown, Charlie Jones, appears in Rinehart's novel The After House (1913). The After House began serialization in McClure's in June 1913, attracting further interest to the case, and Bram was paroled in August 1913.

As Reader's Digest editor Fulton Oursler (aka mystery writer Anthony Abbot) relates in The Mystery Bedside Book (ed. John Creasey, 1960), Theodore Roosevelt read The After House and called on Rinehart. Oursler states that Roosevelt concurred with Rinehart's view of the case and wrote President Woodrow Wilson, asking for a pardon for Bram. Wilson granted the pardon in June 1919. Bram went on to captain the ship Alvena and to own a restaurant in Florida.

Paretsky on Green and more.

The winter 2018 issue of the University of Chicago Magazine features "Criminal Mastermind," an article on alumnus Sara Paretsky, in which she talks about her role in the mystery world as "the aging diva," the work of Anna Katharine Green, and her experiences as a student at the university. Says Paretsky, "Crime fiction is the place in literature where law and justice in society come together."
Posted by Elizabeth Foxwell at 4:03 AM No comments: