February 24th proves to be a popular day for mystery birthdays.

The pioneering Grant Allen (seen at left) was born on this day in 1848. He died in 1899. He achieved a certain level of notoriety with his novel The Woman Who Did (1895), which advocated free love. Some of his better known mystery works are An African Millionaire (1897), Miss Cayley's Adventures (1899), and Hilda Wade (completed by his friend Arthur Conan Doyle, 1900), the latter two featuring early female detectives. August Derleth, well known for his science fiction, works of the macabre, and admiration for H.P. Lovecraft but also author of a number of Sherlock Holmes pastiches featuring Solar Pons, was born today in 1909. He died in 1971.

And mystery author Rupert Holmes, Tony-winning composer of The Mystery of Edwin Drood and forever dubbed the "Pina Colada guy" for his hit song "Escape," turns 60 today. His latest novel is Swing, featuring a 1940s jazz musician who is implicated in a murder.
Posted by Elizabeth Foxwell at 12:06 AM No comments:

Belgian mystery author Georges Simenon, creator of Inspector Maigret, was born on February 13, 1903. He died in 1989. Penguin is reprinting several of his novels, including The Hotel Majestic and The Bar on the Seine, and you can catch Maigret on the MhZ Networks.
Posted by Elizabeth Foxwell at 12:07 PM No comments:

A student of legendary film composer Miklos Rozsa, Goldsmith possesses considerable credits, including the theme for The Man from U.N.C.L.E., the Star Trek films, Hoosiers, The Planet of the Apes, The Sand Pebbles, and most of all for mystery fans, Barnaby Jones, L.A. Confidential, The List of Adrian Messenger, Police Story, and Chinatown. I'll be playing some excerpts from the Chinatown soundtrack and Man from U.N.C.L.E. on the February 12th broadcast of "It's a Mystery" in Goldsmith's honor.
Posted by Elizabeth Foxwell at 12:15 AM No comments: 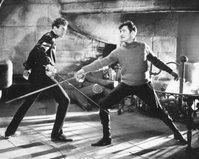 Hope's best-known work is probably that swashbuckling tale of political intrigue, The Prisoner of Zenda, with its far-fetched yet engaging scenario of identical cousins (cue "Patty Duke Show" music here), one a commoner and the other a king, pitted against the nefarious Prince Michael and Rupert of Henzau (boo, hiss). It was a smash bestseller when published in 1894, which generated a congratulatory telegram to the author from Robert Louis Stevenson.

There were three silent-film Zendas before the beloved 1937 film with Ronald Colman, Douglas Fairbanks Jr., and Madeleine Carroll. It was filmed again, less successfully, in 1952 with Stewart Granger, Deborah Kerr, and James Mason, and its premise was also seen in the 1993 movie Dave with Kevin Kline, Sigourney Weaver, and Frank Langella.

I plan to play part 1 of a radio production of "The Prisoner of Zenda" on the February 12th broadcast of my radio show "It's a Mystery." It stars Ronald Colman, Douglas Fairbanks Jr., and C. Aubrey Smith. "It's a Mystery" airs at 11 AM ET on Mondays and is Webcast here.
Posted by Elizabeth Foxwell at 12:10 AM No comments:

The world of mystery periodicals is a small one, and those involved in it can often talk about unusual things. I once had an enthusiastic conversation with an editor colleague about copyediting styles, only to look up to find his wife, mystery author Kate Charles, and fellow scribe Dean James regarding us as if we each had sprouted two new heads.

Kate Stine, editor-in-chief of Mystery Scene magazine, has more on her mind these days than properly placed semicolons. In an interview with Julia Buckley, Kate talks about Mystery Scene's effort to contribute to the library rebuilding effort after Hurricane Katrina, what's involved in editing a 5x/year magazine, her favorite mystery reading, and more.

Full disclosure: I'm a consulting editor for Mystery Scene and write for the magazine. You can read my review of Margaret Coel's The Drowning Man here.
Posted by Elizabeth Foxwell at 12:05 AM No comments:

Author Margaret Millar, the wife of Lew Archer creator Ross Macdonald, was born on February 5, 1915. She died in 1994. Millar won an Edgar for Beast in View in 1956; other notable works include How Like an Angel and Beyond This Point are Monsters.

Stark House Press has reprinted Millar's novels An Air that Kills and Do Evil in Return, and Crippen and Landru has published a collection of her short stories. Stay tuned for the spring 07 issue of Clues: A Journal of Detection, which is a theme issue focusing on Millar's work.
Posted by Elizabeth Foxwell at 12:05 AM No comments: