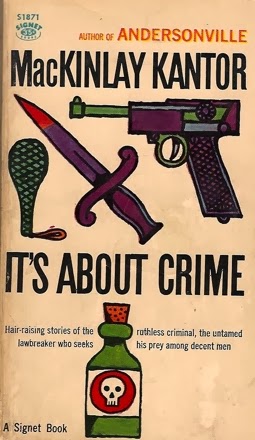 The collection provides much fascinating material and is a quick read. It is best suited to those who like hard-hitting mystery prose (for example, Kantor refers to a bullet as a "lead messenger"), and younger readers might need a tutorial from their elders as to past conventions such as a night letter.

In "Sparrow Cop," Nick, a rookie assigned to the zoo, receives a lot of ribbing about his job from his brother the seasoned cop ("you can never tell about bears," the latter says), yet Nick's encounter with an unaccompanied child leads to something far more sinister and gives his smart-aleck brother his comeuppance. "Rogues' Gallery" offers an unusual method for fingering criminals. The detective in "Something Like Salmon" must connect a bunch of fragmented clues provided by a lunch counter proprietor to find a gang of bank robbers. In "Nobody Saw Him Fall," an observant janitor who moonlights as Santa Claus figures out who framed him for murder (with Kantor commenting on class). An interesting twist occurs in "The Shadow Points," as a man thinks he has devised the perfect way to recover the valuable items from a long-ago robbery. The humorous "The Strange Case of Steinkelwintz" features an amateur sleuth on the trail of a missing baby-grand piano.

Kantor, Pulitzer Prize winner for Andersonville (1955) and writer of the story that became the film Gun Crazy (1950), died in 1977. His son, Tim, offers reflections in My Father's Voice: MacKinlay Kantor Long Remembered (1988).
Posted by Elizabeth Foxwell at 5:02 AM 1 comment:

This 1952 episode of Suspense about a woman attempting to smuggle an incriminating document out of communist territory features a story (published in Tales of Adventurers, 1952) by Rogue Male's Geoffrey Household, an appearance by Paul Newman, direction by Robert Mulligan (To Kill a Mockingbird, Summer of  '42), and a lot of melodramatic organ music.


Posted by Elizabeth Foxwell at 5:03 AM No comments:

The Wellcome Library, known for its medically related materials, has opened its historical images collections so that users can download high-resolution images for no charge. The only requirement is to acknowledge the library as the source. (Thanks to PhiloBiblos for the tip.)
Posted by Elizabeth Foxwell at 5:04 AM No comments:

Below: Clip from The Verdict (1946, dir. Don Siegel), with Sidney Greenstreet and Peter Lorre, based on Zangwill's The Big Bow Mystery.

In Kansas City Confidential, John Payne is framed for an armored car robbery, and he sets out to learn who set him up.

Ray Betzner has started a new blog on author-collector Vincent Starrett, a key figure in the Baker Street Irregulars and Sherlockian scholarship. I'm very fond of collections of Starrett's columns and essays: Bookman's Holiday (1942) and Books Alive (1940).
Posted by Elizabeth Foxwell at 5:03 AM No comments:

The application deadline for research fellowships at UT-Austin's Harry Ransom Center is Jan. 31. Fellowships range from 1 to 3 months and from $1200 to $3000 for individuals who need to consult the center's collections (including those working on dissertations). Its mystery collections include the Sherlock Holmes and Sherlockian Collection; correspondence from Mary Elizabeth Braddon, Wilkie Collins, Patrick Hamilton, and Edgar Allan Poe; and manuscripts of J. S. Fletcher, Dashiell Hammett, A. E. W. Mason, Beverley Nichols, and Baroness Orczy.
Posted by Elizabeth Foxwell at 5:02 AM No comments:

Posted by Elizabeth Foxwell at 5:07 AM No comments:

There is an interesting 1942 newspaper clipping regarding charges against Kelly and writer Rene Raymond (aka James Hadley Chase, the author of No Orchids for Miss Blandish) for publishing obscene books—apparently pertaining to Kelly's Lady–Don't Turn Over (1940) and Road Floozie (1941) and Raymond's Miss Callaghan Comes to Grief (1941). The National Archives of Australia discusses here the banning of several Kelly books—including Road Floozie—and Mickey Spillane's novels.
Posted by Elizabeth Foxwell at 5:04 AM No comments: 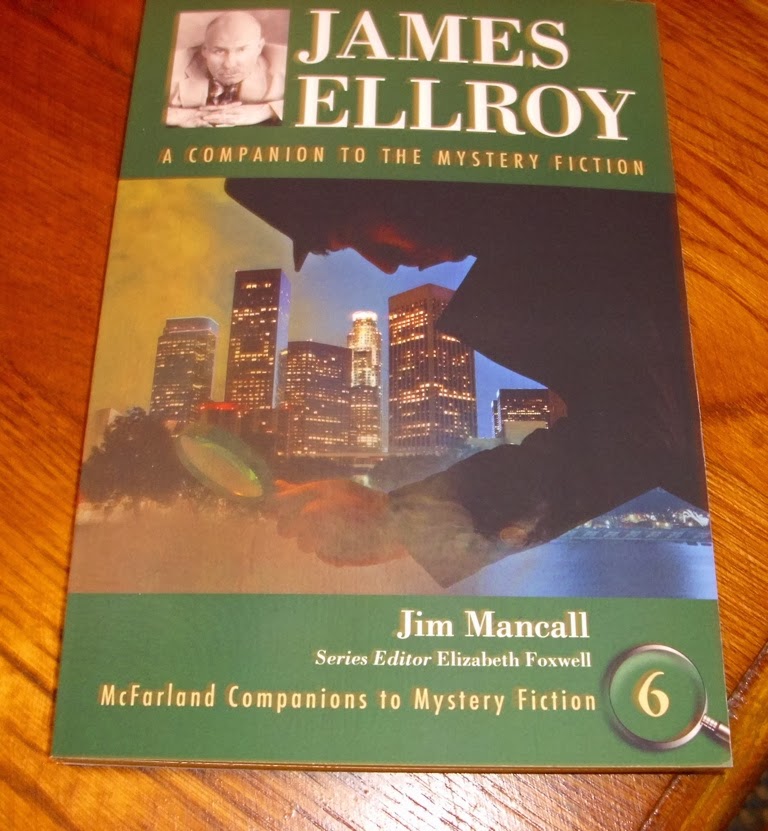 James Ellroy: A Companion to the Mystery Fiction, written by Jim Mancall (Wheaton College, MA), was published on January 2. It is volume 6 in the series I edit for McFarland.

Author-critic Dick Lochte calls it "a clear, comprehensive guide to the Demon Dog’s dark, complex literary world." In the view of the Midwest Book Review, these companion books compose an "outstanding literary studies series."
Posted by Elizabeth Foxwell at 4:54 PM No comments:

What is one to do when zombies walk the ocean floor?

Pat Browne, the founding editor of Clues, passed away on December 27, 2013, at age 81. Her obituary has been published in the Toledo Blade, and a memorial event is planned for the Popular Culture Conference in Chicago in April. Memorial contributions may be directed to BGSU's Browne Popular Culture Library.

With the help of her husband, Ray, Pat provided one of the few venues for serious scholarship on the mystery genre, starting with the first issue in spring 1980: the product of a November 1978 conference at the University of South Florida on the work of Travis McGee creator John D. MacDonald. Wrote Pat in the issue:


...[W]e decided that the Popular Press would like to inaugurate a publication devoted exclusively to the detection genre, and I decided that the papers that had been presented at the MacDonald Conference and Mr. MacDonald's comments would constitute the core of that new publication—Clues: A Journal of Detection—under the assumption that few publications could be launched under such auspicious circumstances. (65)

Wrote JDM in this first Clues on Francis M. Nevins Jr.'s piece about his pulp work:


My work habits accounted, I think, for not only the diversity of plot and structure and societal themes in early work, but also for the diversity of the places where they were published. . . . When I tried to work exclusively within a specific genre, everything went stale for me. The words died. (66)

JDM noted elsewhere in this commentary piece, "Were I forced to define my strength, I would say that I am best at creating an illusion of contemporary reality" (66).

After serving as Clues editor for approximately 20 years, Pat retired in 2001, and I spearheaded the acquisition of the journal by Heldref Publications from Bowling Green State University in 2003, with the first issue under new management published in 2004. Clues is now published by McFarland, and we can only hope that Pat's "auspicious circumstances" have been fulfilled, as the journal enters its 32nd year of publication with a theme issue on the work of Tana French.