The Sounds of Australia is a program of the National Film and Sound Archive of Australia that seeks to preserve sound recordings of cultural and historical significance to the country. This collection includes the radio crime serials Night Beat and Dossier on Dumetrius. The archive is searching for the silent film The Blue Mountains Mystery (1921).

Below: trailer for the upcoming season of Miss Fisher's Murder Mysteries, based on the novels by Kerry Greenwood with flapper detective Phryne Fisher.

In The Brothers Rico, a former Mob accountant (Richard Conte) finds himself entangled with his ex-employers when his brothers (James Darren, Paul Picerni) fail to go along with Mafia plans. The film, based on the novella Les Frères Rico by Georges Simenon and featuring screenplay work by Dalton Trumbo, also stars Kathryn Grant (aka Mrs. Bing Crosby). 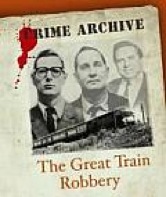 In this podcast from the UK's National Archives, mystery author Peter Guttridge discusses the £2.6 million heist from the Glasgow-London mail train that occurred in August 1963. Not all of the thieves were caught.
Posted by Elizabeth Foxwell at 5:02 AM No comments:

In Chicago Confidential, which debuted this month in 1957, DA Brian Keith suspects that a criminal organization is behind the murder of a union figure rather than the person implicated in the crime. Based on the book by journalists Jack Lait and Lee Mortimer, the film also stars Beverly Garland and Elisha Cook Jr.

Posted by Elizabeth Foxwell at 5:02 AM 2 comments:

In this episode of the radio program This I Believe (hosted by Edward R. Murrow and preserved in the Tufts Digital Library), Edgar nominee Lillian de la Torre (aka Lillian McCue, 1902–93) talks about lessons learned in her life such as "pull [your] own weight in the boat" and "your mind will die if you lose your curiosity."

This Bunburyist post is on de la Torre's "Goodbye, Miss Lizzie Borden" (adapted as "The Older Sister" for Alfred Hitchcock Presents).
Posted by Elizabeth Foxwell at 5:03 AM No comments:

H. F. Heard (aka Gerald Heard, author of the Haycraft-Queen Cornerstone mystery A Taste for Honey and its two follow-ups) talks about moral laws and fears that block the way to happiness in the 1950s program This I Believe (hosted by Edward R. Murrow and preserved in the Tufts Digital Library).
Posted by Elizabeth Foxwell at 5:03 AM 1 comment:

In Girl in the News, Margaret Lockwood plays a nurse accused of killing her patient. Directed by Carol Reed (The Third Man), the film is based on the novel The Girl in the News (1937) by the Detection Club's Roy Vickers with a screenplay by Sidney Gilliat (screenwriter for The Lady Vanishes, Night Train to Munich, Green for Danger).

It is impossible to grasp that the ebullient Barbara Mertz, aka MWA Grand Master Elizabeth Peters and Barbara Michaels, has left us at age 85. I first met her when I interviewed her for a University of Maryland journalism class. After 2 hours I emerged, somewhat dazedly (a typical state of affairs in Mertzdom), with a 17-page, single-spaced transcript and a friendship that would endure for nearly 30 years. To her I owe a great deal, not least my career in mystery and—like many other writers—warm memories of her encouragement, support, and singular presence.

Barbara's storming of considerable bastions in her life and career has benefited women from many walks of life as well as mystery readers and writers. When she was a graduate student in Egyptology at the University of Chicago, she was asked, more than once, why she was taking the place of a man, and why was she there anyway, because she was "just going to get married." She was divorced at a time when single parents were regarded as strange creatures, and she worked hard to support two children by publishing a minimum of two books per year and reviewing books. Well into her seventies, Barbara was descending into Egyptian tombs and maintaining a schedule that would make someone a quarter of her age relapse onto a Victorian fainting couch. Always embroiled in some offbeat enterprise, she once took me with her to purchase a cowboy hat, because she was embarking on a tour with Sharyn McCrumb and Joan Hess that would feature their country-music song stylings.

Given today's popularity of intrepid Victorian archaeologist Amelia Peabody Emerson and her inimitable spouse and son, as well as Barbara's Agatha Award for the Jacqueline Kirby novel Naked Once More, it is easy to forget that she had to fight to write humorous mysteries. Unease existed in the publishing world about reader receptivity to humor, and she had to adopt the Peters pseudonym for these books while maintaining the Michaels pen name for her twists on the Gothic novel. She created a stir with Borrower of the Night when art-historian heroine Vicky Bliss ditched two handsome men for a more attractive new job.

Product of the Day:
"Tools of the Consultant Detective" T-shirt. 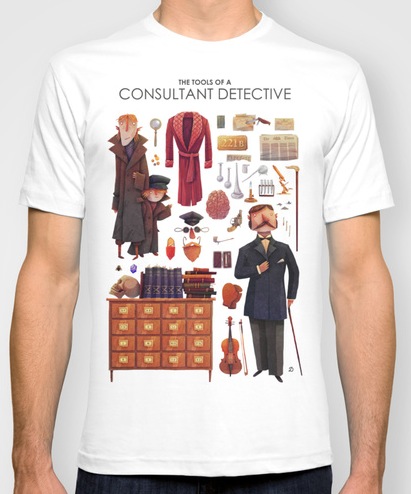 It's hard to resist this T-shirt by artist David Fernandez Huerta with the Great Detective's "tools of the trade" (sadly, the remarkable dog Toby does not seem to have been included). Fernandez Huerta has stated that he designed it with the exhibition "Oficis Extraordinaris" at the 2013 Valencia Book Fair in mind. The design also is available on some other products.
Posted by Elizabeth Foxwell at 5:04 AM No comments:

In Went the Day Well? British citizens confront a Nazi invasion of their village. Newly restored by the British Film Institute, the film is based on the story "The Lieutenant Died Last" by Graham Greene and is directed by Alberto Cavalcanti. The cast includes Dame Thora Hird and David Farrar.

This WNYC radio program with James M. Cain from October 20, 1946, discusses his plan for an American Authors' Authority designed, according to Cain in the Saturday Review, "to give a writer better terms, from publishers, employer, government and everybody else." This proposal was labeled as communist by writers such as John Dos Passos, John Erskine, Clare Boothe Luce, and Ayn Rand, who formed the American Writers' Association with other writers to block it. The Authors League (now known as the Authors Guild) seems to have been caught in the middle of the debate.

Ultimately Cain's plan was unsuccessful. Read the Saturday Review editorial on the topic, followed by the debate between Cain and James T. Farrell (author of the Studs Lonigan series) in the magazine:

Cain--1st part, 2nd part: ". . . a group of freedom's passionate defenders have got together to resist a scowling villain with schemes like Dr. Goebbels's, meaning me."

An additional note: Cain states during the program that his first novel (which would be The Postman Always Rings Twice) sells 500,000 copies per year. 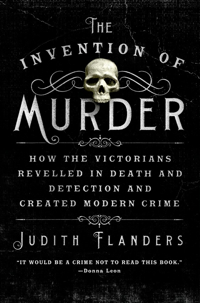 Today in the Washington Independent Review of Books is my review of Judith Flanders's The Invention of Murder: How the Victorians Revelled in Death and Detection and Created Modern Crime.
Posted by Elizabeth Foxwell at 11:45 AM 1 comment: