This wartime update of Baroness Orczy's The Scarlet Pimpernel features Leslie Howard (who also produces and directs) as a mild-mannered professor and champion of those opposed to the Nazis; he was the elusive Pimpernel in the 1934 film.

Posted by Elizabeth Foxwell at 4:03 AM 2 comments: 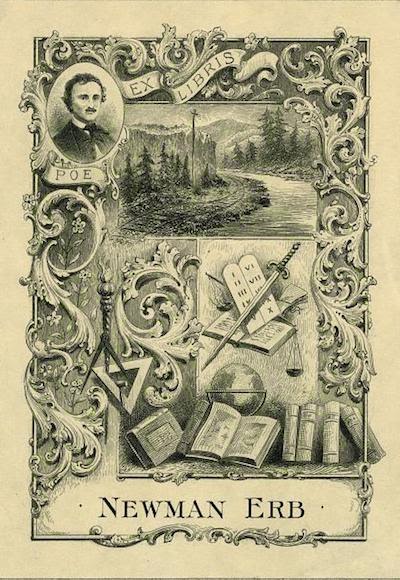 The Library of Congress has created a Flickr album of bookplates from one of its collections, which includes those of Edgar Rice Burroughs, Charlie Chaplin, Jack London, spy and mystery fan Woodrow Wilson, artist Francis Millet (who died on the Titanic), and "the doctor for weak railroads" Newman Erb (which includes an illustration of Edgar Allan Poe, left).

Harvard's Houghton Library has a nifty collection, featuring items such as the Alice in Wonderland bookplate of Harcourt Amory. Another bookplate collection is housed at the Los Angeles Public Library.

Small-town and city newspapers square off when a maid is accused of murder. Dan Duryea, Herbert Marshall, Gale Storm, and Howard Da Silva star. The film is based on a story by Craig Rice (Home Sweet Homicide, Having Wonderful Crime, etc.).

The many sides of Susan Fenimore Cooper.

The online Smithsonian exhibition "Early Women in Science" includes Susan Fenimore Cooper, the daughter of James Fenimore Cooper recognized as an early naturalist via her work Rural Hours (1850). The younger Cooper's novel Elinor Wyllys; or, The Young Folk of Longbridge (1846) features a mystery, although she warned in "The Talent of Reading Wisely" (Feb. 1892) of the dangers to youth of crime novels. She also did not support women's suffrage (see "Female Suffrage: A Letter to the Christian Women of America," 1870).

The exhibition also features noted garden designer Gertrude Jekyll, whose surname is so prominently featured in Robert Louis Stevenson's The Strange Case of Dr. Jekyll and Mr. Hyde (her brother, Rev. Walter Jekyll, was a friend of Stevenson). 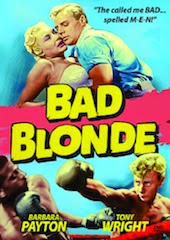 The Bad Blonde of the title, Barbara Payton, wants to be rid of her husband and uses her wiles to get a prizefighter to do the deed. The film was adapted from the novel The Flanagan Boy by British writer Max Catto.

The darker side of the mind.

The Wellcome Trust's online presentation Mindcraft: A Century of Madness, Murder, and Mental Healing includes the evil power of mesmerism such as that exhibited by Svengali in George du Maurier's Trilby (1894) and the 1889 trial of Gabrielle Bompard, who asserted that her male associate had hypnotized her and that she had no memory of committing murder.
Posted by Elizabeth Foxwell at 4:03 AM No comments:

There is no shortage of suspects when a showgirl with a fondness for money is murdered. On hand are Van Heflin (as PI Rocky Custer), Tom Conway (a producer), and Virginia Grey (Custer's wife and fellow investigator). The film is based on the novel by Sue MacVeigh (pseudonym of journalist Elizabeth Custer Nearing, a descendant of George Armstrong Custer who wrote four mysteries).

The mayor, the gangster, the waterfront boss.

The New York Public Radio Archives looks at the checkered career of New York mayor William O'Dwyer, who as district attorney convicted several men involved in "Murder Incorporated" but had some shady associations. The tale involves mafioso Frank Costello.
Posted by Elizabeth Foxwell at 4:03 AM No comments: