On the Oxford University Press blog, Edwin Battistella (Southern Oregon University) discusses the presence of codes and ciphers in works by mystery authors such as Dan Brown, Arthur Conan Doyle, Edgar Allan Poe, and Charlie Lovett.
Posted by Elizabeth Foxwell at 4:07 AM No comments:

This article in the Christian Post notes that G. K. Chesterton's home "Overroads" in Buckinghamshire may be torn down to make way for new apartments. The Society of Gilbert Keith Chesterton opposes the proposal and has been involved in a letter-writing campaign to save the home.
Posted by Elizabeth Foxwell at 4:06 AM No comments:

In a scenario reminiscent of Double Indemnity, a reporter in Apology for Murder helps his girlfriend kill her husband, and another man is accused of the crime. Hugh Beaumont stars.

In the North American Review, editor Grant Tracey examines the narcissism of Waldo Lydecker, a major character in Vera Caspary's Laura (and Caspary's take on Wilkie Collins's Count Fosco).
Posted by Elizabeth Foxwell at 4:06 AM No comments: 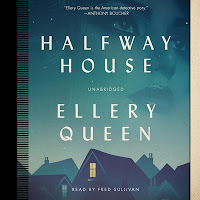 I hadn't encountered a book reviewer who rendered his reviews in verse until recently: Paul Allen of the Brooklyn Daily Eagle in the column "The Verse Side of Crime" in 1935-39. As a sample of his reviews, read his poetic view of Ellery Queen's Halfway House (Brooklyn Daily Eagle, 11 Oct. 1936: C15):

The Lamberton Road, New Jersey
As you'll see by your tourists' guide,
Is more of a byway than just the right highway
To take for a pleasure ride;
It follows the Delaware River,
From Trenton, for miles on miles,
Past garbage dumps and sewage pumps
And a slow stream's rotting piles.

The Lamberton Road, New Jersey,
Runs by a forbidding spot,
Where some unknown, in a day long flown,
Erected a miserable cot;
It now has become weatherbeaten,
And bent by the weight of time—
A decrepit shack, turned a somber black,
A dwelling predestined for crime.

Down Lamberton Road, New Jersey,
Bill Angell, attorney, drives
His car, one night, in the fading light,
Till at the old shack he arrives;
To Bill comes a strange, eerie feeling,
As he draws up with bated breath.
And with nervous quakes, applies the brakes
Of his car by that house marked for death.

On Lamberton Road, New Jersey,
Re-echoes a feminine scream;
It comes from a room of that house in the gloom
Like the wail of a hideous dream;
Then out from the house darts a woman;
She enters her automobile—
A terror-stricken lass, who steps on the gas,
And scrams out of sight with a squeal.

From Lamberton Road, New Jersey,
Bill Angell then enters the door,
And under his eyes, immediately spies
A man stretched out flat on the floor;
The man has a message to whisper:
"A veiled woman knifed me!" he cries;
As Bill grabs his paws (they're his brother-in-law's)
The b-in-l. shudders and dies.

On Lamberton Road, New Jersey,
In that shanty, forbidding and lone,
A murder's committed, and are we outwitted?
We are, for no motive is shown;
But right from the start we're delighted,
To the close of the tale's final scene
By the deeds energetic, phrenetic, kinetic,
Of magnetic Ellery Queen.

(Lamberton Road, BTW, does indeed run along the Delaware River in Trenton.)
Posted by Elizabeth Foxwell at 4:07 AM No comments:

The life of a mystery writer.

For a few more days, you can listen to episodes from the lively Three-a-Penny read by Diana Quick on BBC 4. It is the autobiography of Lucy Malleson, aka Anthony Gilbert and Anne Meredith. Mystery fans may be most interested in the episode "The Detection Club," in which Malleson describes her induction into that august British body with leading roles played by G. K. Chesterton, Dorothy L. Sayers,  and John Rhode.
Posted by Elizabeth Foxwell at 4:05 AM No comments: