On the BBC Radio 4 Great Lives series, host Matthew Parris discusses the life of Dick Francis with Martin Broughton and racing correspondent Jonathan Powell. Francis's devastating experience at the 1956 Grand National, modesty, and "steely toughness of spirit" are recalled, as well as the role of his wife, Mary, in his mysteries.
Posted by Elizabeth Foxwell at 5:02 AM No comments:

I'm just an ordinary fellow with sharp ears and eyes who can sometimes do a problem in mental arithmetic.

Herbert Crosby, assistant to the St. Louis DA and self-styled detective, gets more than he bargained for when he vacations near the lakes of northern Michigan. A shady real estate agent with whom he had an appointment is found murdered in a sunken car, and the sheriff is asking uncomfortable questions about his movements. In addition, his defense of the beautiful Joan Ashleigh against a bully has made the man his sworn enemy, and his stolen gun is implicated in two additional murders. Soon Crosby is entangled with a proprietor of a former speakeasy, a twelve-year-old girl nearly suffocated in a closet, and a countess convinced that European communists are targeting her family. There also may be a connection between the recent murders and the mysterious deaths of Joan's parents. There's a nice twist on the scenario of gifted amateur/dumb yokel law enforcement and fairly advanced commentary for the time on prejudice against Native Americans.

Mary Semple Scott (1873–1968) was a granddaughter of Illinois senator James Semple; her brothers Ashley and Semple Scott made the first electric bus in St. Louis. She was active in the woman's suffrage movement, was the editor of the suffrage magazine The Missouri Woman, and was a friend of American novelist Winston Churchill (not to be confused with the British prime minister of the same name). Crime Hound was her only mystery novel.

Posted by Elizabeth Foxwell at 5:02 AM 2 comments:

This 1955 TV version of The Miracle on 34th Street features Thomas Mitchell as Kris Kringle, MacDonald Carey as lawyer Fred, and Teresa Wright as Doris (the Maureen O'Hara part). Carey and Wright had appeared earlier together in Hitchcock's Shadow of a Doubt (1943).

From OSS to a winery.

After The Bunburyist featured the TV movie Deadly Harvest, in which a vintner finds Soviet agents on his trail, is it any wonder to find that truth is stranger than fiction? In this podcast, Peter Earnest of the Intl Spy Museum talks to Peter Sichel, who worked for the OSS, the CIA, and Blue Nun Wines. In the clip below, Sichel discusses his work in the wine business and mentions his intelligence background.

Update. Part 2 of the discussion with Sichel here.
Posted by Elizabeth Foxwell at 5:04 AM No comments:

Ardai on rediscovered Cain, From the Bookshelf.

On Gary Shapiro's From the Bookshelf, Charles Ardai talks about Hard Case Crime's release of James M. Cain's The Cocktail Waitress, the manuscript found in the files of Cain's agent and the Cain papers at the Library of Congress.

Posted by Elizabeth Foxwell at 8:11 AM No comments:

On David English's Book Talk, Erin MacDonald discusses her new book Ed McBain/Evan Hunter: A Literary Companion, vol. 3 in the McFarland Companions to Mystery Fiction series that I edit. She covers the 87th Precinct series that did so much to establish the police procedural, Hunter's work with Alfred Hitchcock, and the differences between the McBain and Hunter works. On Hunter, MacDonald says, "His humor, his intelligence, his compassion, and his grasp of social issues come through in all his writing."
Posted by Elizabeth Foxwell at 5:03 AM No comments:

In Please Murder Me (1956), a lawyer (a pre–Perry Mason Raymond Burr) successfully defends his client (Angela Lansbury) against a murder charge, but all may not be well. The film is directed by Peter Godfrey (Christmas in Connecticut, The Two Mrs. Carrolls).

Coffin Ed Johnson and Grave Digger Jones are on the case in Chester Himes's Cotton Comes to Harlem this week on BBC Radio 4 Extra. Episodes usually may be heard online for up to week after broadcast.
Posted by Elizabeth Foxwell at 5:02 AM No comments:

A vicar detects this week on BBC Radio 4 Extra. 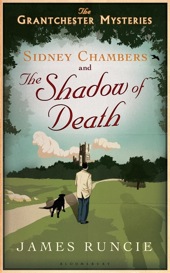 James Runcie's Anglican clergyman-sleuth looks into the death of a lawyer in Sidney Chambers and the Shadow of Death this week on BBC Radio 4 Extra. Episodes usually may be heard online for up to a week after broadcast. Runcie, artistic director of the Bath Literature Festival, is the son of the late Robert Runcie, the former archbishop of Canterbury.
Posted by Elizabeth Foxwell at 5:05 AM No comments:

Posted by Elizabeth Foxwell at 9:36 AM No comments:

Spies in fiction on SpyCast.

This week, BBC Radio 4 Extra features Edwardian sleuth Thorpe Hazell from Anglican clergyman-author Victor Whitechurch's Thrilling Stories of the Railway (1912), read by Sherlock's Benedict Cumberbatch. Episodes usually may be heard for up to a week after broadcast. Whitechurch, a member of the Detection Club, contributed to its round-robin novel The Floating Admiral.