In this adaptation of the novel by Charlotte Armstrong, in which one of the screenwriters was poet Dylan Thomas, a secretary thinks her employer's life is in danger at the hands of his three sisters.

The Detroit News reported that a lawsuit regarding the sale of Elmore Leonard's papers to the University of South Carolina had been settled. Christine Leonard, Leonard's ex-wife, had sued alleging that Leonard's company, trust, and son had sold the archive in secret (stating that a stipulation in the divorce decree entitled her to a share of the proceeds).
Posted by Elizabeth Foxwell at 4:07 AM No comments: 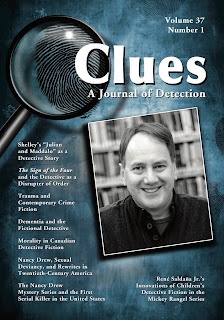 Volume 37, no. 1 of Clues: A Journal of Detection has been published, which can be purchased from McFarland & Co. (Cree-French Canadian author Wayne Arthurson is on the cover). The abstracts for the issue follow below.

The Sign of the Four and the Detective as a Disrupter of Order / NATHANAEL T. BOOTH (Huazhong University of Science and Technology, China). Arthur Conan Doyle’s The Sign of the Four (1890) often is read in the context of British imperialism and bourgeois rationality, which stresses the problematic nature of Sherlock Holmes’s activity as a detective. Separated from its imperialist context, the novel shows a Holmes who unsettles (rather than restores) social order.

“I ain’t going to the jailhouse if I can help it”: The Thriller Impulse in Ron Rash’s One Foot in Eden / JIM COBY (University of Alabama in Huntsville). This essay examines how the contemporary Appalachian writer Ron Rash employs the tropes of mystery thrillers—tropes largely ignored in southern fiction—in his novel One Foot in Eden (2002), as he grapples with an increasingly urbanized Appalachia.

Trauma and Contemporary Crime Fiction / MARY ANN GILLIES (Simon Fraser University, Canada). This article explores the role of trauma in contemporary crime novels by Laurie R. King and Peter Temple. It argues that, as understandings of what constitutes trauma have shifted over the last century, crime fiction has adapted as well, representing trauma in sophisticated and complex ways and, in so doing, mirroring the contemporary preoccupation with it.

The Case of the Missing Memory: Dementia and the Fictional Detective / MARLA HARRIS. This essay explores the challenges of creating a detective with dementia in Mitch Cullin’s A Slight Trick of the Mind (2005), Adele LaPlante’s Turn of Mind (2011) and Emma Healey’s Elizabeth Is Missing (2014). As these metaphysical narratives feature paradoxes of identity, they can help destigmatize this devastating condition.


Read more »
Posted by Elizabeth Foxwell at 4:08 AM No comments:

Amid the very busy Popular Culture Association conference of last week (see my Twitter feed), I had a chat with Clues contributor Claire Meldrum (Sheridan College, Canada). Meldrum is working on a biography of Anna Katharine Green (listen to her talk about Green on Vermont Public Radio). She is interested in hearing from anyone who has come across mentions of Green and her work by fellow writers (Green did meet Arthur Conan Doyle during one of his lecture tours). Contact Meldrum here.
Posted by Elizabeth Foxwell at 4:08 AM No comments:

A young man is troubled by a dream that shows his father's death as murder and soon discovers a sinister stranger romancing his mother and sister.

On April 18 at 11:30 am, I'm delivering the paper "'A Necessary Clue': The Mysteries of Isaac Asimov" at the Popular Culture Assn conference in Washington, DC, which attempts to refute the perception of Asimov as merely a purveyor of gimmicks in his mysteries and stumps for his neglected mainstream mystery debut, The Death Dealers (aka A Whiff of Death, 1958).  (This new piece on Sherlock Holmes and SF mentions Asimov, who was a Baker Street Irregular.)

My fellow presenters are Kim Sherwood (University of the West of England and author of Testament), Elizabeth Cuddy (Hampton University), and Christine A. Jackson (Nova Southeastern University).  Read the conference program (guest passes can be purchased onsite for $50 per day for those who would like to attend for a day or two).

On the World War I Centennial News podcast, I talk about the life and work of New Haven's black pianist-composer Helen Hagan and her performing for black troops in World War I France.
Posted by Elizabeth Foxwell at 4:08 AM No comments:

"Genre Bending: Crime's Hybrid Forms" is a new call for papers for a theme issue of Clues that will be guest edited by Maurizio Ascari (University of Bologna). Submission deadline: October 1, 2019. 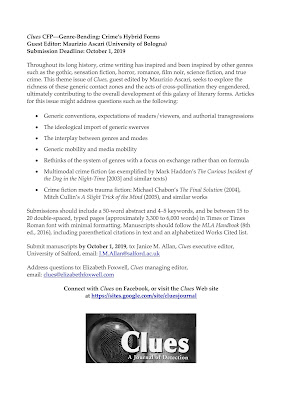 In "The Scott Machine," part of the short-lived TV series The Asphalt Jungle, Deputy Commissioner Matt Gower (Jack Warden) finds himself and his squad in the undesirable position of protecting a neo-Nazi (Robert Vaughn).  John Astin costars.

The many comforts of mysteries. 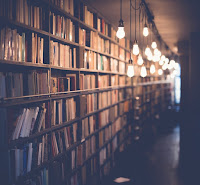 In the Financial Times, Charlotte Mendelson enumerates the reasons why mysteries are a comfort when personal life is tough: plots, good people confronting bad things, the triumph of the detective, the many different kinds and numbers of mysteries, and the quality of writing.
Posted by Elizabeth Foxwell at 4:08 AM No comments: