Just in time for Halloween, Clues 30.2 has been published—a theme issue on paranormal mysteries guest edited by Agatha and Macavity nominee A. B. Emrys. A quick rundown of the content appears below; I'll insert links once the articles are uploaded to the McFarland Metapress Web site. Go here for details on ordering the issue or subscribing. The cover features Kevin Bacon in Stir of Echoes. 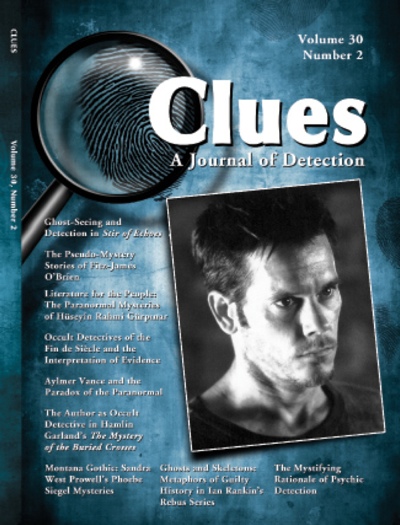 What Are They? The Pseudo-Mystery Stories of Fitz-James O’Brien PETE ORFORD The works of Fitz-James O’Brien are largely forgotten. The author considers how two of O’Brien’s works resemble early detective ﬁction and assesses how the stories’ hero, Harry Escott, both conforms to and subverts the ﬁgure of the detective as presented by the bookending icons of C. Auguste Dupin and Sherlock Holmes.

Literature for the People: The Paranormal Mysteries of Hüseyin Rahmi Gürpınar ÖZGÜR ÇIÇEK (Binghamton University, SUNY) and IRMA KERTUNA-HOWISON (Beykent University, Istanbul). The authors examine Hüseyin Rahmi Gürpınar’s paranormal mysteries in the context of the modernization of the late Ottoman Empire. His popular style, distinctive from other Westernizing movements at the time, as well as his incorporation of traditional narrative techniques, reveal how Gürpınar hybridizes the Western genre of paranormal mystery in early Turkish literature.

CSΨ: Occult Detectives of the Fin de Siècle and the Interpretation of Evidence SARAH CROFTON (King's College, London). Early occult-detective ﬁction aped the familiar detective formula, playfully substituting its basis in criminalistics for psychical research. In disrupting the archetype, it draws attention to a gap traditionally elided in detective ﬁction but at the heart of occultism: that between proof in its absolute sense and the persuasive proof of a convincing story.

Aylmer Vance and the Paradox of the Paranormal OLIVER TEARLE (Loughborough University, UK). How can the ever-mysterious world of the supernatural be successfully joined with the detective story, a genre that thrives on tying up loose ends in the narrative? Through a comparison of some of the best-known ﬁctional psychical detectives and investigators, this article seeks to explore the important issues surrounding this hybrid genre.

Beyond the Border: The Author as Occult Detective in Hamlin Garland’s The Mystery of the Buried Crosses TIM PRCHAL (Oklahoma State University). Occult detectives probe ﬁctional mysteries rooted in the supernatural. In The Mystery of the Buried Crosses (1939), Hamlin Garland recounts his investigation into a real-life mystery involving spiritualism. Like the ﬁctional detectives, Garland urges readers to ponder the borders of their physical world but offers no deﬁnitive stance on supernatural intrusions.

Ghosts and Skeletons: Metaphors of Guilty History in Ian Rankin’s Rebus Series ERIN E. MacDONALD (Fanshawe College, Canada). The author examines Ian Rankin’s use of the gothic convention of the ghost in Black and Blue, Dead Souls, Set in Darkness, and “The Very Last Drop.” In these works, ghosts and skeletons are used as metaphors for Detective Inspector John Rebus’s guilt over past mistakes and for the dark past of his home city, Edinburgh.

Ghost-Seeing and Detection in Stir of Echoes MURRAY LEEDER (Carleton University, Canada). The author explores the links between the ghost story and the classical detective story, using as a case study the 1999 ﬁlm adaptation of Richard Matheson’s Stir of Echoes (1959). The author explores the relationship of the restless dead to the living as well as the investment of the detective with powers to see a secret world hidden from everyday human vision.

The Mystifying Rationale of Psychic Detection EDEN LEONE (Bowling Green State University, OH). Through an examination of the USA Network series Psych (2006–), the author discusses how the psychic detective subverts the model of rational detection as exempliﬁed by Sherlock Holmes.

ESSAY
Homicide and Home-icide: Exhuming Ireland’s Past in the Detective Novels of Tana French SHIRLEY PETERSON (Daemen College, NY). Tana French’s Dublin Murder Squad series features police procedurals in which homicide investigations act as a social critique of “home-cide” in the “new” Ireland spawned by the economic boom known as the Celtic Tiger. Dublin is a crime scene in which victims of its inconvenient past refuse to stay buried until justice is served.

BOOK REVIEWS
Stephen Knight. The Mysteries of the Cities: Urban Crime Fiction in the Nineteenth Century. DANIEL STEIN
Christine A. Jackson. The Tell-Tale Art: Poe in Modern Popular Culture and Paul Meehan. Horror Noir: Where Cinema’s Dark Sisters Meet JIM MANCALL
A Land Down Under: Recent Crime Fiction and Nonﬁction from Australia STEPHEN KNIGHT
Posted by Elizabeth Foxwell at 5:05 AM