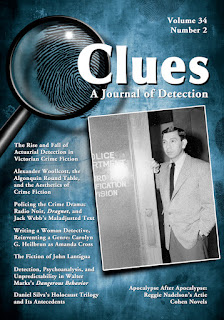 The vol. 34, no. 2 issue of Clues (2016) has just been published and can be ordered from McFarland. The issue is also on Kindle, Nook, and Google Play.

The following are abstracts for the issue.

Making Crime Pay:  Alexander Woollcott, the Algonquin Round Table, and the Aesthetics of Crime Fiction
MARY LOUISE REKER (Library of Congress)
Between the two world wars New York theater critic Alexander Woollcott was deeply enamored of crime writing. He corresponded with both U.S. and British crime writers and promoted their work through his columns and broadcasts. Woollcott also wrote a regular column for the New Yorker, whose founding editor, Harold Ross, encouraged the writer Edmund Wilson to challenge Woollcott’s crime fiction aesthetic.

Policing the Crime Drama:
Radio Noir, Dragnet, and Jack Webb’s Maladjusted Text
JEFF OUSBORNE (Suffolk University)
The links between film noir and “radio noir” crime drama remain largely unexamined. The author explores the relationship between Jack Webb’s early radio-noir mystery program Pat Novak, for Hire and his work on the semi-documentary police procedural Dragnet. The programs suggest the porous borders of film, radio, and television, which together shed light on aesthetic, thematic, generic, and cultural shifts in the development of noir and procedural drama across different media.
Mystery, Melbourne, and Mother Paul: The Novels of June Wright
STEPHEN KNIGHT (University of Melbourne)
The recently reissued crime novels of Australian writer June Wright, some with highly capable nun-detective Mother Paul, are enjoying a resurgence of interest. Wright’s work is notable for structural variety, close detail of setting, and an early interest in female-gendered crime writing. This essay explores Wright’s corpus, commenting on its recurring themes and characters.

Clueless: Genre, Realism, and Narrative Form in Ed McBain’s Early 87th Precinct Novels
JESPER GULDDAL (University of Newcastle)
As pivotal contributions to the emerging genre of the police procedural, Ed McBain’s early 87th Precinct novels are caught up in a dual logic of genre negation and genre performance—they develop a new style of writing by actively and aggressively “undoing” the defining features of earlier detective fiction: the clue; the process of detection; and the narrative causality that links crime, evidence, and investigation.

Writing a Woman Detective, Reinventing a Genre:
Carolyn G. Heilbrun as Amanda Cross
KIMBERLY MASLIN (Hendrix College)
In Writing a Woman’s Life, Carolyn G. Heilbrun laments the limited range of narratives available to women. The challenge of remedying this situation is far from simple, however, since it requires imagining narratives where few existed. In her quest to evoke alternative narratives, Heilbrun not only creates feminist sleuth Kate Fansler but also reconceptualizes the role of the detective and the nature of crime and its resolution.

Crime, Cuban American Style: The Fiction of John Lantigua
HELEN OAKLEY (Open University, UK)
John Lantigua is a contemporary Latino crime writer about whom little has been written. Through an analysis of Player’s Vendetta (1999) and The Ultimate Havana (2001), which feature Cuban American PI Willie Cuesta, the author explores how the detective’s relationship with his family and criminal cases illuminate issues concerning Cuban American identity.

A Different Language for Every Patient:  Detection, Psychoanalysis, and Unpredictability in Walter Marks’s Dangerous Behavior
MUHAMMAD FURQAN TANVIR (Univ of Management and Technology, Pakistan)
The author analyzes Walter Marks’s novel Dangerous Behavior (2002) to illustrate, on the one hand, the all-important procedural interrelation between criminal detection and psychoanalysis and, on the other, the complicated issues surrounding the fallibility of behaviorist approaches to personality.

Revealing the Secret History of Our Time:
Daniel Silva’s Holocaust Trilogy and Its Antecedents
DAVID SEED (Liverpool University)
This essay examines the early fiction of Daniel Silva up to his Holocaust trilogy: The English Assassin, The Confessor, and A Death in Vienna (2002–04). It applies Silva’s own statement about the crucial role in history of intelligence agencies to the themes and methods of his own fiction, tracing the invention and development of his serial protagonist Gabriel Allon, who is both Mossad agent and art restorer.

The Stripper Castrated, or How Leigh Redhead’s Peepshow Stages the Art of “Being Both”
ALISTAIR ROLLS AND MARGUERITE JOHNSON (University of Newcastle)
Leigh Redhead’s Simone Kirsch novels feature a tense combination of showing and telling. Does the telling explain or obscure the showing? Does the showing stand in for—or predicate—the telling? This essay pursues these questions via Redhead’s “eureka moment,” looking for origins and pre(-)texts in the author’s confessional essay and her debut Simone Kirsch novel, Peepshow (2004).

Apocalypse After Apocalypse: Reggie Nadelson’s Artie Cohen Novels
JAMES PEACOCK  (Keele University)
This article examines three New York crime novels by Reggie Nadelson—Disturbed Earth (2004), Red Hook (2005), and Manhattan 62 (2014). It argues that these works have an atmosphere that is, partly in response to 9/11, exaggeratedly apocalyptic but that they ultimately emphasize historical continuities and reject apocalyptic thinking.

Charles Brownson. The Figure of the Detective: A Literary History and Analysis. Heta Pyrhönen