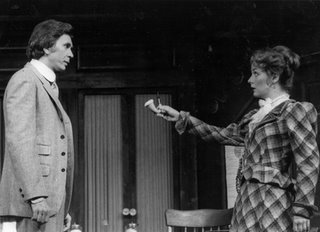 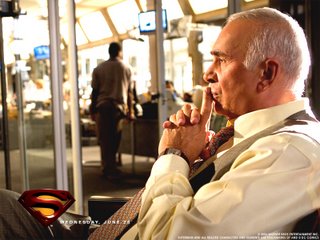 Superman Returns is now in theaters, with New Jersey's own Frank Langella (below) as Perry White.
How many remember him as Sherlock Holmes (at left; photo by Jan A. Wein) in the Williamstown Theater Festival of 1977?

Yes, I'm a fan, a result of growing up with a relative of Langella and being fortunate enough to meet him on a few occasions. Perhaps you have your own favorite performance: Langella as the uber-evil chief of staff in Dave? As the title role in Dracula? As William S. Paley in Good Night, and Good Luck? As the roguish sidekick of Ron Moody in Mel Brooks's The Twelve Chairs? In any of his Tony-winning performances (he's won two and been nominated four times)?

As a villain, he can't be beat, but I'm most fond of his turn in the Noel Coward part in "Design for Living," which co-starred the late Raul Julia and Jill Clayburgh, at Circle in the Square in New York. In it, he displayed exemplary comic timing.
Posted by Elizabeth Foxwell at 4:29 PM