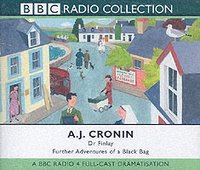 In the car amid the dregs of Hurricane Ernesto, I listened to the delightful BBC audio adaptation Dr. Finlay: Adventures of a Black Bag by Scottish physician-turned-author A. J. Cronin, probably best known for his bestselling novels The Citadel and The Keys of the Kingdom.

You may remember the 1944 film of The Keys of the Kingdom with Gregory Peck, the Doctor Finlay series on PBS starring David Rintoul and Ian Bannen (1993), and The Citadel film versions with Robert Donat (1938) and Ben Cross (1983). This BBC Radio 4 adaptation features stories narrated by Dr. Cameron, the elder partner in a medical practice located in the Scottish Highlands, about his stubborn younger colleague Dr. Finlay. The stories have the distinct feeling of James Herriot's All Creatures Great and Small via eccentric townspeople; a young, dedicated protagonist who has a lot to learn; and poignant tales such as one in which a devoted wife keeps a serious secret from her soccer-star husband so as not to distract him from the championship match. 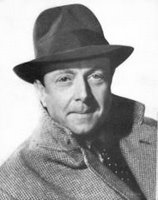 Cronin (1896-1981), a surgeon in the Royal Navy during World War I, turned to writing when an ulcer forced him to give up his medical practice. There's a fun article by the late John Z. Bowers in the University of Maryland's medical alumni magazine about Cronin and other "truants from medicine."
Posted by Elizabeth Foxwell at 3:55 PM

Wow. Talk about another era. I watch PBS to catch the gentler BBC programs because they allow me to escape and thus relax. But then I have a run of radio shows from the 40s including "A Date with Judy" and "The Great Gildersleeve" so I guess there's a part of my medium-boiled soul that enjoys more innocent times. I dont believe I've heard A.J. Cronin's name mentioned in decades. Thnks.