Alice, Where Art Thou? 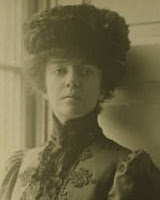 As I've published two short stories with Alice Roosevelt Longworth as detective, I looked forward to reading Alice: From White House Princess to Washington Power Broker by Stacy A. Cordery, the first biography of Theodore Roosevelt's eldest daughter that draws from Alice's embargoed diary and other personal papers. Unfortunately, I was disappointed. I learned little that was new, plus the writing style is somewhat clunky and displays errors (despite the genealogical chart in the book, the author refers to journalist Joseph Alsop as Alice's nephew, whereas he was her cousin as the grandson of Alice's aunt Corinne Roosevelt Robinson). Other readers may be interested in the details about Alice's troubled marriage to philandering Ohio Congressman and Speaker of the House Nicholas Longworth and her affair with Idaho Senator William Borah that produced a child, Paulina.

A media sensation when she was First Daughter (partly due to the fact that her stepmother shunned publicity), Alice is frequently typecast as purveyor of the bon mot, social gadfly, and persecutor of her cousins Eleanor and Franklin. What is often missed is her staggering intellect (her light reading was Greek philosophy) and her fierce family loyalty (although she imitated Eleanor's high voice, she also talked about Eleanor's beauty as a young woman and popularity with her relatives, disputing her cousin's portrayal of herself as an ugly duckling). Also, Eleanor and Franklin publicly opposed the candidacy of Alice's half-brother Ted for New York governor, which took Alice a long time to forgive.

A better alternative may be Mrs. L by Michael Teague, which is the result of interviews with Alice prior to her death. It's all in her own distinctive voice and lavishly illustrated.

Posted by Elizabeth Foxwell at 11:01 AM