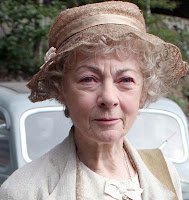 Gilbert Magazine, a publication of the American Chesterton Society, has posted an "Open Letter to the Agatha Christie Estate" by Chris Chan that criticizes the latest Miss Marple adaptations now airing on PBS. Says Chan, "When productions imply that Christie adaptations are only watchable if sex and violence is added, the battle for respectability is already lost." Similar howls of outrage were heard on DorothyL after Tuppence Beresford--hardly a mess as an accomplished spy and former World War I nurse--was portrayed as a lush by Greta Scacchi in the new adaptation of By the Pricking of My Thumbs. The discussion on the Mystery! board is equally negative, not least for the fact that many of the plots bear no resemblance to the original texts (such as the adaptation of Nemesis).

Insulting is the mind-set that older works must be "updated" because today's audiences will be unable to grasp their references. The popularity of Jane Austen adaptations demonstrates that audiences can understand and appreciate works written in another era (Miss Austen's unerring eye for universal characters undoubtedly is key as well). One blogger stated that as the Joan Hickson Marples and David Suchet Poirots were definitive, remakes serve no purpose and asks, "Why have we never seen Parker Pyne on our screens, for example?" It's a good question. Private investigator Pyne, teamed with Dame Agatha's alter ego Ariadne Oliver as he was in "The Case of the Discontented Soldier," would make for an entertaining series.
Posted by Elizabeth Foxwell at 11:06 AM

I still haven't forgiven John D. MacDonald for updating his stories in The Good Old Stuff.