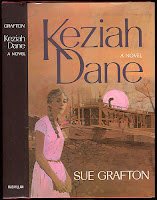 Shamus, Anthony, and Macavity winner Sue Grafton, the creator of path-breaking PI Kinsey Millhone, was born today in Louisville, Kentucky, in 1940. Her first novel, Keziah Dane, was published in 1967, and Grafton also has several television scripts to her credit, such as an adaptation of Agatha Christie's Sparkling Cyanide (1983).

Millhone debuted in A Is for Alibi (1982), the same year of the first appearance of Sara Paretsky's V. I. Warshawski. Millhone's latest outing is T Is for Trespass (2007).
Posted by Elizabeth Foxwell at 7:45 AM