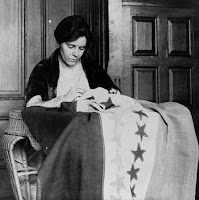 The ratification of the 19th amendment to the Constitution—giving American women the right to vote—occurred today in 1920 (thanks to Tennessee state representative Harry Burn, whose mother told him to "be a good boy and vote for suffrage").

To watch "Sufferin' till Suffrage" from Schoolhouse Rock, go here.

About the photo: Alice Paul, author of the Equal Rights Amendment, sews a star onto a suffrage flag (stars were added as states ratified the 19th amendment). Library of Congress, Prints and Photographs Division, reproduction number LC-USZ62-119710.
Posted by Elizabeth Foxwell at 5:12 AM