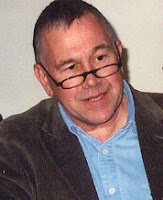 The multitalented mystery author, radio producer, and Detection Club president Simon Brett will appear on a future episode of the BBC's I Did It My Way, and you can participate by submitting questions to radio7@bbc.co.uk by 6 pm on February 26th. Clips from Brett's career, including the radio adaptations of his hapless actor-sleuth Charles Paris, are planned to be aired during the program.

I do wish there was a radio adaptation of Brett's Lines of Enquiry, his mystery written entirely in verse. It's hilarious.

About the photo: Simon Brett by Jason David Hall.
Posted by Elizabeth Foxwell at 5:07 AM