"The trouble with this crime," Inspector Heinsheimer complained, "is that there are too damn many possibilities. We've already got two wronged women, a coke sniffing thief, a mysterious business associate, and there were half a hundred people around the store last night after your closing time whom we haven't even talked to." . . . He sighed heavily. "A department store's a hell of a place for a murder. . . . Now you find a feller done in in a saloon, and you know where you're at." — Zelda Popkin, Death Wears a White Gardenia 98

Today's selection for Patti Abbott's Forgotten Books series is Zelda Popkin's lively Death Wears a White Gardenia, in which department store detective Mary Carner hunts for the murderer of the store's credit manager, who has been quite busy with an extramarital affair and various blackmailing

activities. The pretty Mary, who was hired because "she looked like a lady, rather than like a detective" and for her "clear and quick" mind (25, 26), ably navigates her way among pretentious store executives, impertinent elevator operators, put-upon female secretaries, stalwart policemen and store security personnel, shoplifters from all walks of life, salt-of-the-earth cleaning staff, and—best of all—a prototype of that unique character, the New York cabdriver. Intriguing chapter titles include "The Inspector Finds a Clue," "Who Is Lying?," and "The Blonde in the Case." This is one in the delightful Dell mapback series. 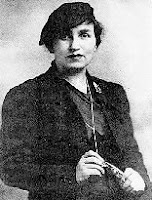 Journalist, author, and PR professional Zelda Popkin (1898–1983) wrote one standalone, So Much Blood (1944), and four mysteries with Mary Carner after Death Wears a White Gardenia: Time Off for Murder (1940), Murder in the Mist (1940), Dead Man's Gift (1941), and No Crime for a Lady (1942). Popkin's A Death of Innocence (1971) was adapted as a CBS TV movie in 1971 and starred Shelley Winters as the mother of a murder suspect. Her best-known books are probably The Journey Home (1945), about a serviceman returning from World War II, and Small Victory (1947), one of the earliest U.S. novels dealing with the Holocaust. For further details, see this Web site on her work developed by her grandson, University of Kentucky professor Jeremy Popkin, and her autobiography, Open Every Door (1956).

What a lovely review. I thank you so much for the time that went into this. Anytime you have another, you know where to find me.

Thanks, Patti! Happy to serve.