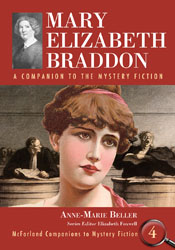 that I edit (vol. 1 on John Buchan; vol. 2 on E. X., aka Elizabeth, Ferrars; vol. 3 on Ed McBain/Evan Hunter). It is tentatively scheduled for publication in summer 2012. In this work Beller details the life and career of an important figure in the development of the mystery in the nineteenth century; as Lucy Sussex noted in Women Writers and Detectives in Nineteenth-Century Crime Fiction: The Mothers of the Mystery Genre, Braddon created the first clerical sleuth and other characters who detect (such as Robert Audley in Lady Audley's Secret [1861–62] and Eleanor Vane in Eleanor's Victory [1863]). Her first novel, Three Times Dead (aka Trail of the Serpent), was serialized not long after the first installments of Collins's Woman in White. Braddon's long and lucrative career in sensation fiction stretched from the 1860s to 1916, a year after her death in 1915.