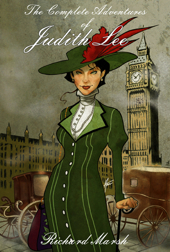 There's been a lot of interest in my review of Richard Marsh's hard-to-find Judith Lee stories (1912–16) since it appeared as part of Patti Abbott's series on Friday's Forgotten Books. Now Black Coat Press has issued The Complete Adventures of Judith Lee. According to editor Jean-Daniel Brèque, the edition includes the stories collected in Marsh's Judith Lee: Some Pages from Her Life (1912) and The Adventures of Judith Lee (1916), as well as "The Barnes Mystery" (a 1916 story from the Strand magazine). This is welcome news for fans of early female sleuths and Marsh.