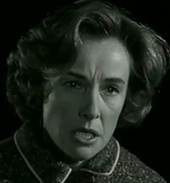 episode of Alfred Hitchcock Presents, Phyllis Thaxter, who died on August 14 at age 92, portrays a secretary determined to even the score with her nasty former boss. Based on a short story by John Cheever (for which Raymond Carver wrote a sequel, "The Train"), it was scripted by Edgar winner Charlotte Armstrong.
Posted by Elizabeth Foxwell at 5:01 AM

I would love to see this one. Love Thaxter and Cheever.

This a very good one! Thaxter plays a fine line between sinister revenge seeker and obsessed madwoman. What is it about setting a crime story on a trian that makes it all the better?

Watch it a few times to let it sink in. Hitchcock directing Phyllis Thaxter's makes her performance is a MASTERPIECE of acting!
--Alan