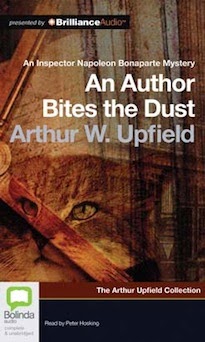 Philip Morton in the Southern Highland News (Australia) notes the 50th anniversary of the death of British-born author Arthur Upfield, an important figure in Australian crime fiction as the creator of aboriginal detective Napoleon "Bony" Bonaparte. Bony debuted in The Barrakee Mystery (1929, aka The Lure of the Bush) and appeared in 29 works. An Edgar nominee for The Bushman who Came Back (1957), he influenced authors such as Tony Hillerman. Assessing Upfield's place in Australian and international literature is Investigating Arthur Upfield: A Centenary Collection of Critical Essays. The TV movie 3 Acts of Murder (2009) delves into the fatal results when a friend of Upfield used one of the author's fictional methods of murder.