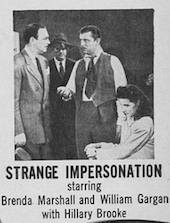 A scientist (Brenda Marshall) resorts to extreme measures after her car hits a pedestrian and she is blackmailed, while her assistant (Hillary Brooke) plots to steal her boyfriend (William Gargan). One of the film's screenwriters is Mindret Lord, who also wrote as Garland Lord with his then-wife, Isabel Garland (daughter of author Hamlin Garland); their novels include Murder's Little Helper (1941), She Never Grew Old (1942), and Murder with Love (1943). Lord committed suicide in 1955.