Minnesota-born author Mabel Seeley (1903–91; The Listening House, The Chuckling Fingers, The Beckoning Door, The Whistling Shadow, etc.) gave the talk "What's in a Mystery?" at the Minnesota Library Association annual conference in October 1940. A transcript of the meeting's proceedings, including Seeley's often wry presentation that featured excerpts from The Whispering Cup, is in the Minnesota Reflections digital archive (another speaker was Jan Struther, the author of Mrs. Miniver). Seeley noted:


The other night I met a very nice man who had just finished [The] Listening House. He looked me over rather cautiously, first from a distance and then a little closer and finally said, "Well, I wish I had seen you before I read that book—I wouldn't have been half so scared" (5).

She summed up the theme of her talk as "a Mystery Story—what is in it, what you demand of it, and what you may get thrown in on the side as a type of appetizer" (5). She placed mysteries firmly in the category of "escape fiction":

They make no effort to improve your mind—their purpose is to take you out of your mind so that you forget that you have a cold, or that the Olson boys are using one of your best books for a football, or that the lady next door suspects you of making passes at her husband, or whatever your personal faults may be. . . .[Y]ou can demand of it only what light fiction supplies. It isn't fair to ask that it have a moving theme, or that the narrative problem be universal in its scope or that it be realistic in all of its aspects. What you can ask that it do what it set out to do—that while you are reading it you have a whale of an exciting time. (6) 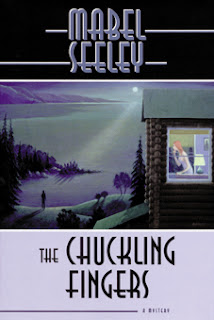 She believed that a mystery story should "grab you on page one and hold you so completely to the end that no extraneous thought can pass through your mind, not even Hitler" (6). Her next step was "to try to snare your sympathies. Now of course there is nothing so sympathy rousing as a nice girl in a lot of trouble" (9). Following was "run[ning] into some real heart-stoppers in the way of events" (11). Seeley then discussed an unsuccessful exchange with her publisher when she wished to have a character with an illegitimate child: "The subsidiary crimes that you can use in the Mystery Story are blackmail, theft, and dope peddling—these apparently are not considered as immoral. The only thing you must be sure to leave out is sex" (12). She used settings that she knew or had visited in Minnesota.

Seeley described the movement from the "how" type of mystery as written by Conan Doyle to the "why" type of mystery that she believed displayed "rather good writing. It is very simple, direct, and vivid" (18). She asserted a few things that are no longer the case such as not taking swipes at churches or clergy, and not portraying criminals as successful or sympathetic. She concluded with the following:


...[T]here are a lot of people in the world who are sometimes sick or bored or desperately unhappy or desperately tired. On the whole, those are the people who read Mystery Stories. If I make them forget for a little while the troubles that beset them, then for me that is enough to convince me that I have done the job I started out to do. (23)