Exhibition on race and dime novels. 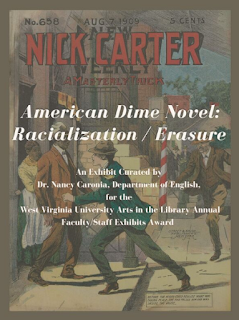 Also included: Maum Guinea and Her Plantation Children (1861) by Metta Fuller Victor, which had a similar effect in Britain about the evils of slavery that Harriet Beecher Stowe's Uncle Tom's Cabin had in the United States. Victor wrote the first U.S. detective novel: The Dead Letter (1864).

Nancy Caronia, the curator of the exhibition and a teaching associate professor in WVU's Department of English, will be giving a free, virtual presentation about the exhibition on November 4.