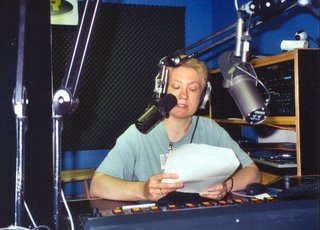 Here is a fetching photo of me in action on "It's a Mystery," my weekly show featuring interviews with mystery authors and others in the field, old-time radio mystery plays, and music from mystery TV shows and movies, on WEBR in Fairfax, VA. WEBR is broadcast on cable TV in Fairfax and Reston, VA and Webcast on Mondays at 11A ET here. J. Kingston Pierce gave the show a nice mention on his blog "The Rap Sheet" (see "Foyle'd Again" on my interview with Foyle's War creator Anthony Horowitz).

Using my previous experience as a newscaster on University of Maryland's WMUC (the oldest college radio station in the country), I created "It's a Mystery" because I was disturbed by the dearth of broadcast outlets for mystery authors unless their name was something like Clark, Patterson, or Grisham. I felt certain that readers wanted to hear about authors beyond the bestseller list, and I was concerned about the lack of knowledge out there about classic mystery writers such as Mary Roberts Rinehart, Charlotte Armstrong, and Edgar Wallace. I found written pearls of wisdom by now deceased writers such as A. A. Fair (aka Erle Stanley Gardner, the creator of Perry Mason) and thought, "Wouldn't it be wonderful to have an audio archive of mystery authors talking about their work before (God forbid) they leave us?" "It's a Mystery" is a small step in that direction.

WEBR is a noncommercial, public access station, where you can hear everything from early American rock 'n roll of "The Professor Rocks" and all Beatles music on "The Magical History Tour" to progressive rock, folk music, and talk shows such as the magazine format "American Odyssey"---all without paying for satellite radio. The producers are all volunteers.

To listen to the radio promo for "It's a Mystery," click here.
To listen to past author interviews, go here.

And you can listen here to a short excerpt from the theme from the 1968 TV show "Judd for the Defense," starring Carl Betz (playing a lawyer modeled on F. Lee Bailey). The theme was composed by Star Trek's Alexander Courage.
Posted by Elizabeth Foxwell at 3:16 PM