I've been perusing My First Book, in which several notable writers (e.g., Conan Doyle, Kipling, Bret Harte, Marie Corelli) discuss their first published work. Although this edition was published in 1897 by Chatto & Windus, today's writers will detect a number of familiar themes. To wit: 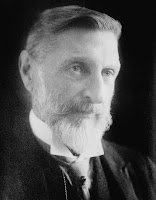 "... I read that whatever success I had met with as a writer of fiction was due to my literary friends and 'nepotic criticism.'" -- H. Rider Haggard (135; seen at left)

"It rose to my lips to answer him that it was not always the books written very, very well that brought in the biggest heaps of money; that if heaps of money were his chiefest hope he would be better advised to devote his energies to the glorious art of self-advertisement and the gentle craft of making friends upon the Press." -- Jerome K. Jerome (x)

"[I]t is a curious fact ... that I have never been able to take kindly to a plot--or the suggestion of a plot--offered to me by anybody else. ... it is, I believe, a fixed idea in the novel-reader's mind that any combination of events out of the beaten way of life will make an admirable subject for the novelist's art." -- Mary Elizabeth Braddon (110-11)

"Anybody can write a short story--a bad one, I mean--who has industry and paper and time enough; but not everyone may hope to write even a bad novel. It is the length that kills." -- Robert Louis Stevenson (298)