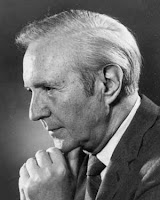 With the encouragement of Martin Edwards, I borrowed (via the magic of Interlibrary Loan, as it is no longer in print) Crime in Good Company (1959), a collection of thoughtful essays on the art of mystery writing edited by Michael Gilbert and featuring not only the expected (Chandler's "The Simple Art of Murder"; the ubiquitous Julian Symons) but also several delightful pieces from unanticipated quarters (Cyril Hare on the classic mystery; Mary Fitt on the mystery radio play--remember those?; David Alexander's "Is Television Necessary?"). Sadly, most of the contributors are no longer with us, with the exception of Jacques Barzun, who celebrated his centenary in November 2007.

There's ex-cop Maurice Procter (Hell Is a City) on the policeman's view of the criminal. Author-poet L. A. G. Strong's praise of Margery Allingham (". . . Allingham's 'One Morning They'll Hang Him,' with a looser texture and a more leisurely pace than those of most American writers, achieves an enviable symmetry, and her red herring, the call at the chemist's shop, is slipped in with Chekhovian adroitness"). Barzun grousing about the authorial preoccupation with the psychological problems of the detective that detracts, in his view, from the story ("Do I look like a couch?").

I enjoyed Gilbert's summing up of the modern bad guy ("Modern villains, like Socialist cabinet ministers, have now to go to the best Public Schools. They are large, suave men, men who change into dinner-jackets most nights of the week and have acquired their skill with firearms competing for the Ashburton"). He also displays the art of the lively introduction, such as these descriptions of American contributing author Stanley Ellin ("He looks not unlike a large brown bear, is a philosopher, and excellent company") and British espionage master Eric Ambler ("[Ambler] says that he was an unpleasant child, but produces no evidence of this beyond a single attempt to blow up his own house with nitroglycerin").

About the photo: Jacques Barzun, former provost of Columbia University.
Posted by Elizabeth Foxwell at 8:34 AM

Glad you liked it! Perhaps one of these days some noble publisher will reprint the book...let's hope so.