An answer to the Chicken Little atmosphere in publishing. 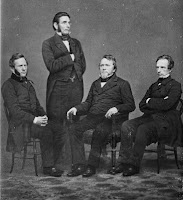 I have one reply to the gloom surrounding the acquisitions freeze at Harcourt and the Random House reorganization: consider the example of Harper & Brothers (some of the Harper siblings can be seen at left, taken by Matthew Brady bet. 1855 and 1865).

Dec. 1853: Harper & Brothers premises in New York are destroyed by fire; damages are estimated at $1 million, with only $250,000 covered by insurance.

1854: The offices of printers to whom Harper & Brothers farmed out printing burn; plates for various books are wiped out.

1855: The Harper brothers open rebuilt facilities that are considered an architectural and technological marvel at the time.

1899: Harper & Brothers goes bankrupt. Says William Dean Howells, whose Rise of Silas Lapham was published by Harper & Brothers: “It was as if I had read that the government of the United States had failed” (qtd. in Strouse, Morgan: American Financier 366).

2006: C. S. Lewis's The Chronicles of Narnia makes $104 million in one quarter for HarperCollins.

In sum, on the eve of the twentieth century, Harper & Brothers was poised on the brink of oblivion. As can be seen in this brief example, however, there were many, overwhelmingly better things to come.
Posted by Elizabeth Foxwell at 5:02 AM