Vera Caspary's The Secrets of Grown-ups.

Through the magic of Interlibrary Loan I borrowed The Secrets of Grown-ups (1979), the Edgar-nominated autobiography of Vera Caspary—author of Laura (1943), screenwriter of A Letter to Three Wives (1949) and Les Girls (1957), playwright, and wife of producer I. G. Goldsmith. A Chicago native, Caspary started out writing sometimes dubious correspondence courses (including learning ballet by mail—yes, you read that right), advertising (no doubt explaining the barbed portrayal of the advertising world in Laura), and editing Dance magazine. A Greenwich Village bohemian and a writer on the "Greylist" due to a one-time (albeit confused) association with the Communist Party, Caspary examines her successes and failures with an unflinching eye and such a wry vitality that it is hard to believe she has been gone for more than 20 years.

At age 29 she published her first novel, The White Girl, about a black woman passing as white. About the genesis of Laura, Caspary says:

Mysteries had never been my favorite reading. The murderer, the most interesting character, has always to be on the periphery of action lest he give away the secret that can be revealed only in the final pages. If mystery writers were to expose character in all of its complexity, they could never produce the solution in which the killer turns out to be the butler, the sweet old aunt or a birdwatcher who ruthlessly kills half a dozen people in order to get hold of the cigarette case with a false bottom that conceals a hundred-thousand-dollar postage stamp. . . .

Every character in [. . . Laura], except the detective, was to be a suspect— particularly the heroine, with whom the detective was to fall in love. If her innocence was in doubt, how could her thoughts be made clear to the reader? I did not want to cheat.

. . . The story fascinated my friend Ellis St. Joseph, who suggested that I try the Wilkie Collins method of having each character tell his or her own version, revealing or concealing information according to his or her own interests. (The Secrets of Grown-ups 194–95)

Caspary goes on to dub her contract for the film "one of the worst contracts ever written" (208) and believes that her fierce battle with Otto Preminger over the script resulted in a sparkling rewrite by Samuel Hoffenstein.

I wish The Secrets of Grown-ups was in print, as its voice is unique, refreshing, and especially inspiring to women in its independent outlook. Caspary's Laura and Bedelia have been reprinted as part of Feminist Press's Femmes Fatales series. 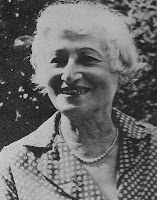 . . . I decided to become an onlooker, witness to the romantic achievements of my friends, enjoying rather than envying their romances. I began consciously to shape myself to this pattern, to become a spy on the side of humanity, to observe and learn, to grieve and rejoice over the affairs of others. . . . It was good training for a novelist, even better as education for a baby who had to become a woman.

Nights are not so lonely when there are stories to be written, problems to be solved, paragraphs constructed, and the companionship of ornery, beautiful, wicked, exotic, irresponsible characters more alive to me than the widows counting pennies at restaurant tables.—Vera Caspary, The Secrets of Grown-ups 35–36, 280

About the photo: Vera Caspary, by Jane Rady. From The Secrets of Grown-ups.
Posted by Elizabeth Foxwell at 5:04 AM

Thanks for the review. I just finished Bedelia by Caspary and I wanted to check out her autobio.

I also have to say that the name of your blog is very good. I watched a version of The Importance of Being Earnest, so this was timely.